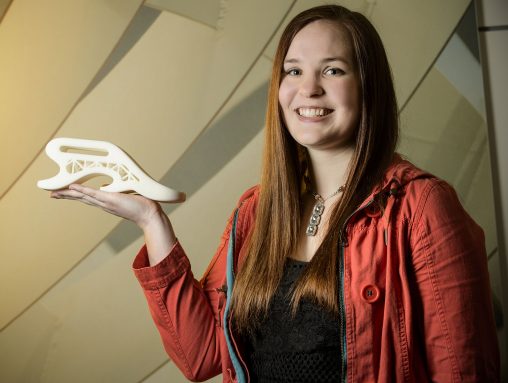 Bridget Fricke, who earned a B.S. in biomedical engineering from Wright State and is working on her M.S. in engineering innovation and entrepreneurship, wants to start her own biomedical company. (Photos by Erin Pence)

When Wright State University engineering and business student Bridget Fricke agreed to help build a rainwater-collection system to nourish a vegetable garden for children from low-income families, she didn’t know it would make her a master at maneuvering excavating machines.

The hard, compacted soil at the site made digging difficult, forcing Fricke and her team to go mechanical.

“We’ve actually all learned how to drive a Bobcat. It’s kind of cool,” she said. “And when we’re digging holes for posts, it takes a really long time. We have to wet the soil before we dig.” 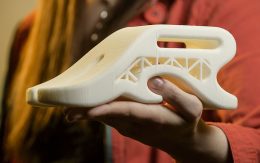 For her senior engineering capstone project at Wright State, Bridget Fricke and her teammates designed a prosthetic foot and used 3-D printing to make it.

The Engineers Without Borders project, which is taking shape next to a church in Trotwood, involves making a stand and a roof for a 1,000-gallon tank. The team has been working on the project for about 18 months.

The roof will collect the rainwater and funnel it into the tank. The water will then be used to irrigate the garden, with the vegetables given to children on school lunch programs that are not available during the summer.

For Fricke, it is a way to use her engineering skills to help the community. And doing things for the betterment of others is nothing new to her.

For her senior capstone project at Wright State, Fricke and her teammates designed a prosthetic foot and used 3-D printing to make it. The benefit is that such a prosthetic can be easily replaced if it breaks.

“Trying to mimic the motion of the human body with a prosthetic is difficult,” she said.

The challenge was to find a material strong enough to support a body’s weight, but flexible enough to not inhibit the natural walking motion of the person. 3-D printing was used to additionally allow for customization of the prosthetics. For example, for people who invert their feet when they walk, a customized prosthetic can be made that takes that into account.

The group identified Nylon-12 as the ideal material because it is strong and has just the right amount of flexibility.

Fricke grew up in Centerville. She graduated from Centerville High School in 2012 and enrolled at Wright State, majoring in biomedical engineering.

Fricke had always been strong in science and math and was also interested in health care, at one time thinking of pursuing medical school.

“Biomedical engineering was the intersection of both of those things — a passion for medicine and engineering,” she said.

In addition to Engineers Without Borders, she is a member of the Society of Women Engineers, is a teaching assistant and interns at Illumination Works, a Beavercreek-based data analytics company for which she does marketing and business development.

Fricke’s career goal is to start her own biomedical company, making prosthetics or medical devices.

“I would still have a focus on medical devices, but also an entrepreneurial side,” she said.