Their story is powerful. Nearly 400 freed slaves — including an infant less than 1-year-old and a woman over 100 — make a 500-mile pilgrimage on foot and by horse from a Virginia plantation to promised land in Ohio in 1846 only to be driven away and scattered by threats of violence.

Hadley Drodge had heard the account, but it was only words. That is until one fateful day in the summer of 2016 when she arrived at a house in Rossville, Ohio, to pick up some photos and other artifacts for the National Afro-American Museum and Cultural Center from Helen Gilmore, who founded the Springcreek Rossville Historic House Museum and donated the collection.

It was then that she realized she was about to see what few others had – the visual aftermath of the storm-tossed history of the Randolph slaves in photos that told their story. Chills ran down her spine.

“The story I had heard was real, and it was right in front of me,” said Drodge. “When I went inside and saw all of the photographs, I just was overwhelmed.”

Today, the Wright State University graduate public history student is assembling an exhibit about the Randolph slaves that will open at the Afro-American museum in Wilberforce on May 20 and run until Nov. 25. She wants to concentrate more on the slaves than white slaveowner John Randolph, who has always gotten most of the attention.

“My focus is trying to de-center whiteness in history,” said Drodge. “…I hope we can use this as a way to do history in a more honest manner.” 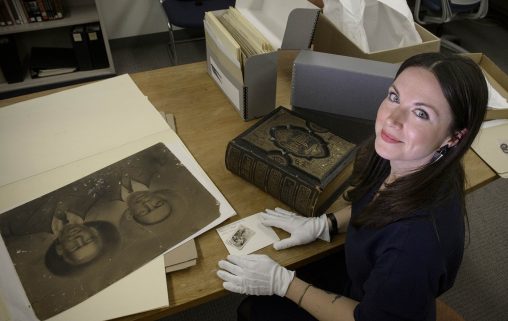 Hadley Drodge, a graduate public history student at Wright State, is assembling an exhibit about the Randolph slaves that will open at the National Afro-American Museum and Cultural Center in Wilberforce on May 20. (Video by Kris Sproles/Photos by Will Jones)

Drodge was exposed to history at a young age. When she was a child, she would accompany her mother about once a week to what is now the Boonshoft Museum of Discovery in Dayton.

“I was always very fascinated by museum exhibits and natural history,” she said. “And I would read books on mythology, so cultural elements were always part of my interest. It kind of transformed into a love of history.”

Drodge graduated from the University of Dayton with a bachelor’s degree in history and in 2009 moved to Brooklyn’s Bedford-Stuyvesant neighborhood in hopes of studying cultural anthropology at the New School for Social Research.

However, she soon realized that cultural anthropology would take her away from working with the community, while a career in public history would enable her to combine academia with community.

So in 2015, she enrolled in the master’s degree program in public history offered by the College of Liberal Arts to pursue a career in archiving and museum studies.

“When I started this program, it was the first time in many years that things really felt like they had fallen back into place. I felt so motivated and so driven,” she said. “The people that keep this program alive are really incredible. And I feel very honored to have learned from them.”

After Drodge began an internship last summer at the museum, the John Randolph materials fell into her lap and she began working on the exhibit.

Randolph was a Virginia tobacco farmer, congressman, senator and served as a minister to Russia. In his will, he freed his slaves and provided for their resettlement, but a legal dispute kept them on the plantation for 13 years.

The executor of Randolph’s will had purchased 47 tracts of land in Mercer County, Ohio, and the freed slaves older than 40 were to each get at least 10 acres. In 1846, the group set out for Ohio in a caravan of 16 wagons, with most of them walking.

A month later they arrived in Cincinnati, boarded boats and traveled up the Miami-Erie Canal to Mercer County. When they arrived, a group of armed white settlers told them the land was no longer theirs and they must leave.

The freed slaves were aided by a group of Quakers, who helped them find employment and put down roots in surrounding communities. That included Rossville, where many of the freed slaves are interred in Jackson Cemetery. They were never able to reclaim their inheritance.

Drodge said the history of the Randolph slaves is based largely on newspaper accounts. However, Helen Gilmore, a Randolph slave descendant, had maintained a collection of photographs, drawings and a family Bible with personal notations. There was also a list of the names and freed numbers of the former slaves as well as a map of Jackson Cemetery that identifies the plots of those buried there even though many of the headstones are gone.

Drodge picked up the collection on that fateful day last summer after it was bequeathed to the museum. 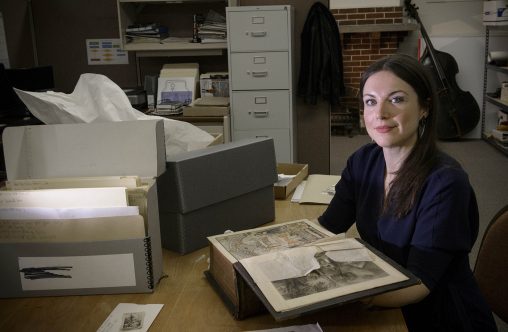 Hadley Drodge wants to use her master’s degree program in public history to pursue a career in archiving and museum studies.

The Bible, with an ornate, bas relief-type cover, is six inches thick and weighs about 25 pounds. There is also an artistically crafted charcoal sketch of two hat-wearing descendants. And then there are the photos — nearly 400, most of them of descendants during the 1910–20 period.

One shows three boys in a car. Another shows a group of “dashing gentlemen” in a tavern at what appears to be a political gathering. But most of the photos are portraits.

“He’s got a story to tell,” Drodge said of a man in one photo. “This isn’t just some kind of posed, cookie-cutter shot. This is a guy who lived a life. And he’s cool.”

While she was going through the collection, Drodge found a lock of hair.

“I had to take a moment when I found that,” she said. “Here you have some tangible piece of a person who owned this. … I’ll never know who it belonged to.”

Drodge said the most emotionally difficult part of poring through the photos is not knowing who the people are.

The next stage of Drodge’s research is to connect with living descendants to collect oral histories and try to identify people in the photos.

“I love the detective work. It’s so exciting,” she said. “History is not just a collection of facts. We all piece this story together to understand something about our identity.”

Drodge plans to continue working on the project following her graduation. She has completed her internship at the museum but would like to work there as a volunteer or in some other capacity.

Rosa Rojas, curator of the museum, said the journey of the Randolph slaves makes them a unique story, one that should be shared with the community. She said Drodge’s passion for the project has pushed it to a higher level.

“This exhibit is really special because it really captures everything we are trying to do here,” said Rojas.