For cat people, Sarah and Ash McGinley have quite the dog.

The Wright State University couple last July adopted Marco, a blind and battered pit bull who was sitting on death row in Virginia. Today, the handsome, affectionate 4-year-old animal is discovering the world with restored eyesight and bringing joy to the McGinleys.

“Marco has changed my life so much,” said Sarah McGinley. “He’s made me more happy and outgoing. I’m kind of an introvert, but if you’ve got a dog with you, people want to talk to you.”

The McGinleys are still trying to help Marco get used to the big, wide world outside of a dog shelter.

“He’s agoraphobic,” said Ash McGinley, adding that Marco has had to be slowly coaxed out of the couple’s Dayton home. And the dog is terrified of thunderstorms, taking refuge in the dark recesses of the basement until they pass.

In addition to their love for Marco, the McGinleys share a passion for writing. 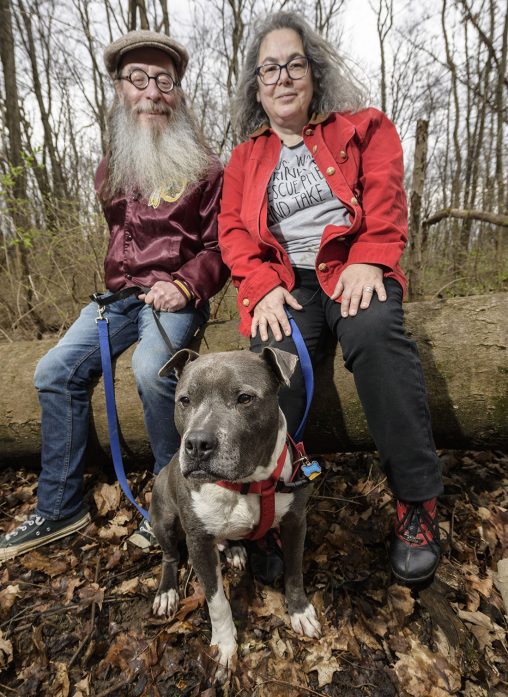 Sarah grew up in Dorset, England, moved to Detroit at age 22 for family reasons, and then to Dayton, where she enrolled at Wright State in 1992 to study creative writing.

After earning her master’s degree in English in 1994, she worked for a small publishing house and the University of Dayton. She later returned to Wright State, where she is a senior lecturer in the Department of English Language and Literatures and primarily teaching composition for nursing students.

Ash grew up in McLean, Virginia, and spent his early working years doing preventive maintenance on computer disks and later hanging drywall. In 1989 he enrolled at Wright State at age 38.

While taking a Great Books English course, he was told he had a talent for writing. He obtained his bachelor’s degree in education in 1992 and became a technical writer and editor, writing weapons and armaments proposals for a defense contractor.

After retiring, he returned to Wright State, where he takes six hours every semester towards a bachelor’s degree in creative writing. He also works at the Writing Center, helping fellow students with their papers.

The McGinleys met in 1993 at Wright State, where they were taking classes together and had offices next to each other. They married in 1996.

“We had 11 cats at one stage,” said Sarah. “That’s what happens when two cat people get married.”

But the cat people have since become dog people.

In 2013, Georgia Obenaus, CEO and founder of Go Rescue Pet Adoption Center in Virginia Beach, came across Marco at a shelter. It was clear the dog had been through hell and back. He was underweight, mangy, had open sores and his tail was just a bone sticking out.

The adoption center later discovered that Marco was also blind. So center officials launched a fundraising drive to pay for Marco’s eye surgery, collecting donations from people around the country.

At the time, Sarah was working on her Ph.D. at Old Dominion University in Norfolk, Virginia. She learned of Marco’s plight after the children of a friend set up a lemonade stand to help raise money for the $3,000 operation.

In November 2015, Marco had surgery to remove the cataracts that had made him blind. For the first time ever, he could see the world around him.

“He had become quite a little celebrity,” said Sarah.

But months and months went by without anyone adopting him.

Then in July, Sarah sent a photo of Marco to her husband. It was a no-brainer for him.

“He said, ‘Cancel your flight home. I’m driving out to get you,’” she recalled.

When the couple arrived at the adoption center in Virginia Beach to meet Marco, it was love at first sight. As they got out of their car, Marco’s handlers were walking him about 25 yards away.

“He saw us and he dragged them over to us and just bowled us over,” said Ash.

Today, Marco is at his new home in Dayton — along with the McGinley’s other dogs, Daisy and Henry — and still exploring a world he can see for the first time.

“He’s just so interested in everything,” said Sarah. “You can see he’s finally figuring out what are these things he’s been smelling all of this time.” 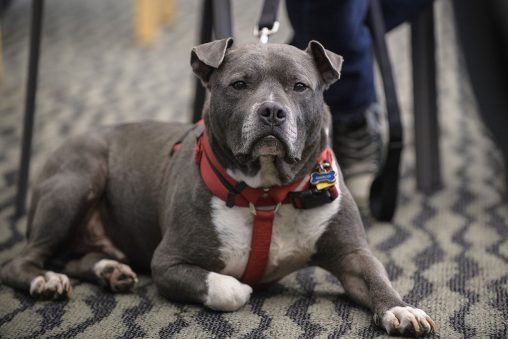 The McGinleys rescued Marco from an adoption center in Virginia Beach, Virginia.

The McGinleys let Marco run around the lot they own next to their house. The couple has been planting an orchard there in an effort to create more green space in Dayton.

They also give back to Wright State.

Several years ago, the McGinleys decided that instead of buying a new car, they would use the money to create a scholarship fund at the university. The Lucy Johnson Jones Scholarship is for English majors and those who are close to getting their degree and may need financial assistance. The couple also established a book fund that enables Dunbar Library to buy British fiction and short stories.

And now they’ve made Marco part of the Wright State family. They often bring him to campus, where he walks the trails of the woods.

“He’s made me outgoing; he’s got me walking around,” said Sarah. “I feel pretty grateful to have him.”

She said adopting shelter dogs can take patience and a lot of coaxing.

“But they will love you,” she said, “like nothing else.”