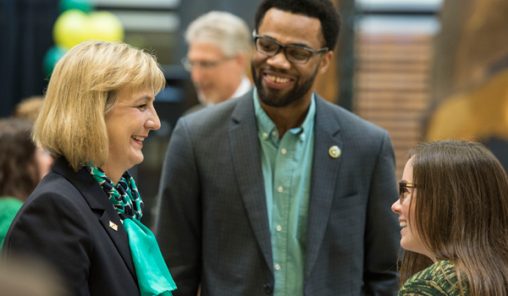 Wright State University President Cheryl B. Schrader is eager to get to work with Student Government leaders and others on campus during her first week on the job.

As Wright State University reaches the half-century mark, incoming President Cheryl B. Schrader is at the controls, pledging to help take the university to the next level while being committed to financial sustainability, administrative transparency and campus communication.

And Wright State’s seventh president is wasting no time getting those conversations started in her first week on the job. She will meet many in the campus community — and they will get a chance to meet her — during a welcome reception on Thursday, July 6, at 3 p.m. in the Student Union Atrium.

“I want to embrace the culture and understand the people,” said Schrader, Wright State’s first female president. “That’s what I’m very much looking forward to.” She has already praised the work being done by Wright State faculty, staff and students.

“This is the right time to be at Wright State because it is an institution that has built up incredible momentum in the past decade and is poised to move to the next level,” said Schrader.

Her conversations will extend off campus, as well. Her second week as president seeks to include meetings with leaders from partner universities, and her third week on the job may focus on external community partners Wright State works with to strengthen the region, the state and beyond.

Schrader believes community engagement has become increasingly important for universities, especially in metropolitan areas. “To me, a university is an intellectual, social and cultural hub of a community,” she said. 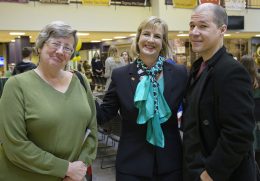 She is as much a facilitator as a leader, believing that Wright State’s success is dependent on the success of individuals and teams. In fact, she moved into administration because she wanted to help others succeed.

Schrader brings a track record of success, transparency and open communications from Missouri University of Science and Technology, where she served as chancellor for the past five years. For example, when spearheading a new strategic plan for Missouri S&T, she sought input and feedback from all corners of campus, from the bottom up.

But she is also laser-focused on student success. “Students are the reason we are here,” she said. “Affordability and accessibility are big priorities for me.”

As a role model and mentor for women in the underrepresented STEM fields of science, technology, engineering and math, she believes in the power of storytelling and sharing the untold stories of successful women. 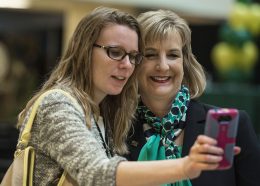 Schrader and then-student Sarah Olsen take a selfie at the reception after Schrader was named president.

She said universities must develop long-term fiscal sustainability models and try to diversify revenue streams. Part of that is working as a team and listening to all voices in the campus and outside community.

Schrader was attracted to Wright State in part because of her experience working with the military and health care partners, both of which are Wright State strengths.

“Universities need to be innovative,” she said. “We need to think of new ways to do business and we have to be creative in our classrooms and also in our laboratories.”

Before joining Missouri S&T, she served as associate vice president for strategic research initiatives at Boise State University and dean of the College of Engineering at Boise State.

She also held numerous administrative positions at The University of Texas at San Antonio, including associate dean for graduate studies and research for the College of Engineering and the College of Sciences, university graduate recruitment coordinator and associate director of the Center for Advanced Propulsion Studies. She also worked at the McDonnell Douglas Astronautics Company in Huntington Beach, California.

Schrader is a recipient of the Presidential Award for Excellence in Science, Mathematics and Engineering Mentoring from the White House.

Her research background is in the area of systems and control. As a systems engineer, Schrader said she would bring a different perspective to the Wright State job.

As a researcher, Schrader has received several best paper awards; written more than 100 publications in the areas of systems and control, robotics and intelligent systems, with biomedical, networking and aircraft applications; and delivered more than 100 presentations and keynote addresses.

Schrader emerged from a nine-month national search and a diverse pool of 61 candidates to win selection by the Wright State Board of Trustees. She succeeds interim President Curtis L. McCray and former President David R. Hopkins. 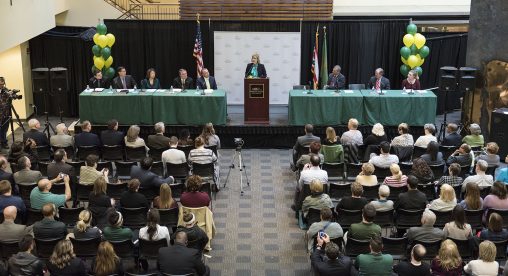 Cheryl B. Schrader addressing the Wright State community for the first time after the Board of Trustees appointed her the university’s seventh president.

She was publicly introduced as the next president on March 6 during a meeting of the Board of Trustees in a packed Student Union Atrium. In her speech, she offered a glimpse of her vision for Wright State — playing a leadership role in tackling issues such as environmental sustainability, energy security and economic growth by providing opportunities for graduates to excel in fields that will define the future.

“The board felt that Cheryl was the best fit for Wright State University,” said board Chair Doug Fecher. “Cheryl’s research background and her ability to meld that with the humanities and the arts is really quite remarkable. We were very impressed with that. We think she will do a great job for our university.”

Schrader believes the nation is at a crossroads, with policymakers, educators and entrepreneurs wrestling with issues such as global competitiveness and geopolitical instabilities that threaten our future.

“We must nurture an ecosystem that allows creativity and innovation to thrive among all of our students, scholars, researchers and employees,” she said. “Only through creative thinking and the convergence of ideas will we be able to address the critical issues of our time as well as prepare coming generations for the issues they will face in the future.” 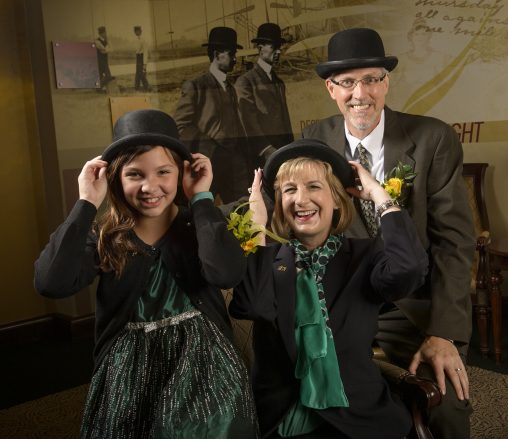 Schrader, her daughter, Ella, and her husband, Jeff, in the Wright Brothers Room in the Student Union after she was named the seventh president of Wright State University.

Schrader believes research universities like Wright State will play a pivotal role in addressing these challenges and that the new playbook for higher education dictates that solutions will come from the best ideas from all sources.

“Together we all make a great team,” said Schrader. “And together we will take the university to the next level.”

Schrader’s husband, Jeff, served for many years in the legal profession. The couple has a son, Andrew, who is pursuing a Ph.D. in mechanical engineering at Georgia Tech, and a daughter, Ella.