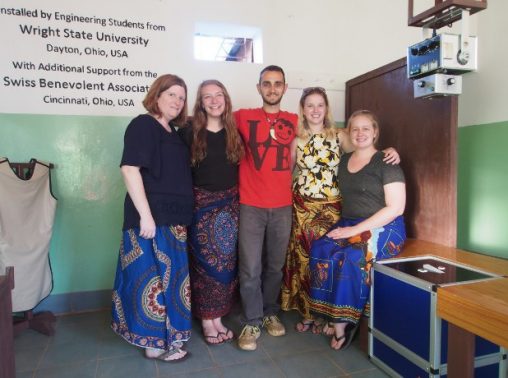 A team of Wright State University engineering students built a digital X-ray system, equipped an X-ray room and trained personnel at a hospital in Malawi as part of an effort to improve health care in the tiny African nation.

Malawi is a nation of 17.2 million people in southeast Africa. It is one of the world’s least developed countries, with a largely rural population heavily dependent on agriculture. Its people have a relatively low life expectancy and high infant mortality.

Hospitals in Malawi only get 9 percent of the country’s budget, most of their equipment is donated, and hands-on hospital care usually falls to family members.

Students Katelyn Adams, Riza Ingalls, Brittany Sommers‐Woods and Lexi Heironimus installed the X‐ray room at Ludzi Community Hospital near Mchinji, which is west of the capital Lilongwe and close to the Zambian border.

The X-ray system for radiographing chests and extremities is used to diagnose broken bones and tuberculosis.

The students installed the digital X-ray system in a room they prepared to house the equipment. They had to fabricate an X-ray shield from sheets of metal and wire the X-ray tube.

Two of the students, who had taken a medical imaging course at Wright State, taught a course in the safe use of X‐rays to hospital employees with at least a two-year medical degree and who had to pass a final exam to be certified as limited X-ray operators.

During a handover ceremony, the students presented hospital officials with keys to the X-ray room and the trigger to the X-ray equipment.

The students also spent three nights camping in South Luangwa National Park, visited the market and other sites in Lilongwe, saw cave paintings up to 15,000 years old in Dedza, visited a wood-carving school at Mua Mission and made a stop at Lake Malawi.

On June 22, the students made a post-trip presentation of the project in the Neuroscience Engineering Collaboration Building. They played videos of Malawi guitar and traditional dance demonstrations and displayed native pottery and woodcarvings.

“The most important takeaway was my appreciation for my education here,” said Adams. “I really found a purpose for engineering.”