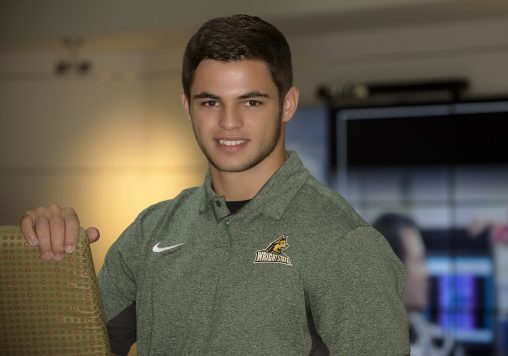 Derek Desentz, a junior computer science and computer engineering major at Wright State, interns at the Air Force Institute of Technology and received a prestigious SMART scholarship from the Department of Defense. (Photos by Will Jones)

High school revolved around sports and playing video games. But when Derek Desentz came to Wright State University, everything changed.

Today, the junior computer science and computer engineering major interns at the Air Force Institute of Technology and won a prestigious SMART scholarship from the Department of Defense that promises to propel him to new heights in his chosen field.

“The biggest thing is all of these opportunities I’ve been given at Wright State — with school, with jobs,” Desentz said as he reflected in the atrium of the Russ Engineering Center on his past and his future.

Desentz grew up in Springfield, Ohio, and attended Kenton Ridge High School, where he graduated as valedictorian of his class. He was attracted to Wright State by a scholarship offer.

“My life changed dramatically once I started here,” he said. “My focus is now on school. I realized what my purpose was.”

Desentz’ interest in video games sparked his interest in computers, but there were no computer classes at his high school.

“I knew I wanted to be an engineer and computers interested me,” he said. “But I had no idea what to expect; I had never done programming before. However, I’ve always enjoyed opening up my mind and just jumping into something new, and that’s really what computer science is all about.”

Last summer, Desentz began an internship at the Air Force Institute of Technology at Wright-Patterson Air Force Base. The institute serves as a graduate school and provider of professional and continuing education for the armed forces. 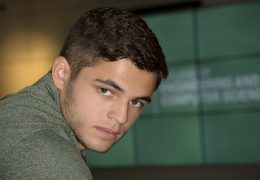 As part of his scholarship from the Department of Defense, Derek Desentz will work at the Air Force Life Cycle Management Center after graduation.

At the institute, Desentz works on various code bases, including a filtering algorithm, and on developing new testing platforms. Most recently, he began work on a machine-learning project, which uses a game engine and features simulated planets and spaceships for research on trajectories.

Desentz credits the Brandeberry Career Development Center in the College of Engineering and Computer Science with helping pave the way for the many opportunities he has gotten while at Wright State. The center, headed by director Sheryl Kent, helps engineering students with their career goals.

Desentz’ most recent achievement was being accepted into the SMART Scholarship Program.

SMART stands for Science, Mathematics and Research for Transformation. It is part of the National Defense Education Program and was established by the Defense Department to support college students pursuing degrees in science, technology, engineering and math disciplines. The program aims to increase the number of civilian scientists and engineers working at Department of Defense laboratories.

The scholarship will provide Desentz with $25,000 a year for the next three years in exchange for him committing to work for three years following graduation at the Air Force Life Cycle Management Center, which is responsible for total life cycle management of Air Force weapon systems.

“It’s a pretty big Department of Defense scholarship designed to help you focus on school,” he said. “This is huge for me.”

Wright State became an independent institution in 1967 and spent the next 50 years growing into an innovative leader in STEM education. In 2017, it celebrates its 50th anniversary as an independent public university, culminating with a special Homecoming celebration Sept. 29 through Oct. 1.