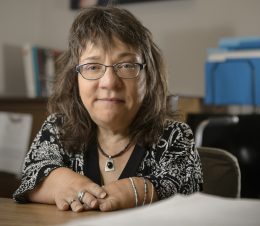 Julie Williams, a professor in the School of Professional Psychology, received the Distinguished Contributions to the Advancement of Disability Issues Award from the American Psychological Association. (Photo by Will Jones)

Julie Williams, professor in Wright State University’s School of Professional Psychology, has won a prestigious national award for advancing disability issues in psychology and beyond.

Williams received the Distinguished Contributions to the Advancement of Disability Issues Award from the American Psychological Association during the group’s convention in August.

The award recognizes association members who have had significant and enduring scientific, professional, educational, mentoring, leadership or political impact in advancing the role of psychological principles to enhance the lives of and promote the inclusion of people with disabilities in society.

“Dr. Williams’ personal experience as an individual living with a disability has also infused her work with a unique perspective and dedication that has been invaluable to others seeking to improve rehabilitation efforts and the quality of life of those living with disabilities,” Jeffery B. Allen, associate dean and professor at SOPP, wrote in his nomination letter. “Please consider this exceptional teacher, researcher, clinician, advocate and person as an ideal recipient of this important recognition.”

“Her unique capabilities and areas of professional expertise have allowed her to add to the education, clinical training, mentorship and professional development of untold numbers of doctoral students in a manner that leaves many of her colleagues awestruck,” Allen wrote.

“She has pioneered successful programs and dedicated her work to raise the voice of underrepresented groups in all areas of her practice,” Erendira Lopez-Garcia, associate director of clinical training in the Office of Disability Services, said in her letter of recommendation. Lopez-Garcia is on staff at SOPP’s Assessment Clinic.

As a member of the disability community, Williams strongly fights for full inclusion of disability. She speaks professionally on disability issues, locally, nationally and internationally.

In 2014, Williams helped organize the national Association of Women in Psychology conference, which drew more than 400 professional psychologists and others from around the country and promoted disability as an identity variable within the organization.

“I hope people walk away understanding that women with disabilities have a voice, that their voices are strong and proud, and perhaps, most importantly, that we make the world a better place,” Williams said at the time.

In 2013, 2014 and 2015, Williams accompanied an Ohio group to an elementary school in Bolivia, where she helped educate and train teachers and parents on disability attitudes. At the time, a movement to overcome the stigma of disability, eliminate the social injustices it creates and open up educational opportunities for disabled children was picking up steam in the South American country.

Since then, Williams has continued to persist in disability activism both on the Wright State campus and in the community. For instance, she advocated to preserve personal care station for students with disabilities at Wright State and joined the disability activist organization ADAPT in Columbus recently to protest potential significant cuts to Medicaid.

In an interview with WBNS-TV in Columbus following the protest, she attempted to explain the intent of the protest and bring awareness to those who would be impacted by cuts to Medicaid, particularly home care services. She said the cuts would force those with significant physical disabilities into institutions, hurt their overall health and well-being and be a violation of their freedom by preventing them from living in their homes with their friends, family and in their communities.

Wright State became an independent institution in 1967 and spent the next 50 years growing its culture and reputation for inclusivity of people with disabilities. In 2017, it celebrates its 50th anniversary as an independent public university, culminating with a special Homecoming celebration Sept. 29 through Oct. 1.