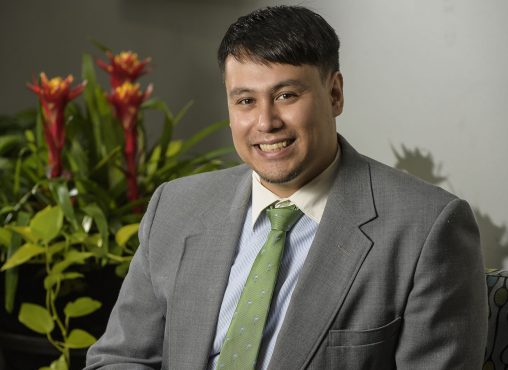 His father is Polish-American. His mother is from Thailand.

So Max Tokarsky grew up in the Dayton suburb of Oakwood influenced by two radically different cultures. He socialized with the local Polish community, but also spent a year in Thailand, even living briefly at a Buddhist monastery in Bangkok.

“I grew up very aware of both of their heritages and practicing them both at the same time,” he said.

But it wasn’t until Tokarsky became a student at the Wright State University School of Professional Psychology that he fully understood and appreciated his mixed ethnicity. His dissertation focuses on the psychology of adolescent immigrants trying to navigate two different cultures.

“It makes a lot of sense coming from my background,” he said. “I developed a curriculum for classrooms where teachers can provide students with education about the psychological process a young teen might go through living between two cultures.”

The fellowship enabled Tokarsky to attend a national psychology convention, intensive training sessions and to plug into a network of professionals who mentor and encourage him to pursue his passion and give him the connections to do so.

After graduating from Oakwood High School in 2001, Tokarsky enrolled at The Ohio State University, received his bachelor’s degree in Spanish and international studies and studied abroad for a term in Granada, Spain.

Following his graduation in 2006, he came to Wright State to earn a teaching English as a foreign language certificate and in 2007 went to teach in Bangkok, where he wanted to experience the culture that had molded his identity.

During the final two months of his one-year stint, Tokarsky lived in a Buddhist monastery and ordained as a monk, a coming-of-age practice for many Thai men. After 35 days, he decided to give up the robes and return to his previous way of life, a normal practice in Thailand.

Buddhism is a religion that originated in ancient India based on the teachings of Buddha. Practices can include the study of scriptures, observance of moral precepts, renunciation of craving and attachment, meditation and the cultivation of wisdom, kindness and compassion.

“It’s looked at as a philosophy or a way of life more so than a religion, even though it’s deeply spiritual,” Tokarsky said. “It allowed me to grow and learn more about Thai culture and the way that they think.”

After leaving Thailand, he returned to Dayton and worked briefly in the Montgomery County tax office before becoming a Spanish teacher at Stivers School for the Arts in 2009.

Being a young teacher, the students took to Tokarsky and would confide in him, seeking his counsel about personal problems. At about the time, he was also running an after-school program at El Puente, a Wright State-led tutoring program that seeks to help young Latino children succeed in school.

In hopes of making a bigger impact in the lives of his students, Tokarsky began taking college psychology classes and in 2013 enrolled in Wright State’s School of Professional Psychology, drawn by its strong emphasis on diversity.

Tokarsky recently started a yearlong internship at a community mental health center and a developmental disability clinic in Long Beach, California. After graduation, he plans to stay in the Dayton community, hoping to work with immigrant populations.