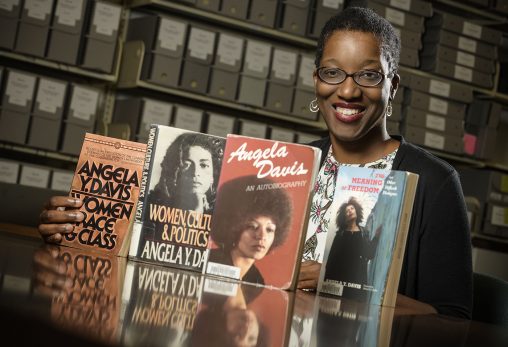 Sharon Lynette Jones, professor of English language and literatures and director of the African and African-American Studies program, will have her book on civil rights activist Angela Davis published next May. (Photo by Chris Snyder)

When she was a young girl, Sharon Lynette Jones was given a book by her mother called “The Black Woman: An Anthology,” a collection of works from female African-American writers. When Jones got older, she realized that the black feminist ideas in the book had helped shape her interest in literature, history and cultural traditions.

Now, Jones, professor of English language and literatures and director of the African and African American Studies program at Wright State University, is the editor of her own book about a black woman — prominent civil rights activist Angela Davis.

Jones has signed a contract with University Press of Mississippi to produce “Conversations with Angela Davis.” The book is scheduled to be published in May 2021. Jones is the editor and responsible for an introduction, chronology and other information. The book project took extensive research and involved visits to archives around the country.

Jones has been to Atlanta to comb through the archives of Emory University. In addition to returning to Emory, she plans visits to archives in California, Alabama, Michigan, Virginia, Illinois, Massachusetts, Florida and the Schomburg Center for Research in Black Culture, a research library of the New York Public Library and an archive repository for information on people of African descent worldwide.

Casting such a wide net is almost a necessity when it comes researching Davis because of her storied history and decades of activism for social justice.

At Emory, Jones discovered a Soviet publication with Davis on the cover. In 1971, the CIA estimated that 5 percent of Soviet propaganda efforts were directed towards the Angela Davis campaign. Jones also turned up Angela Davis greeting cards and a flier for a barbecue that were used to raise money for Davis’ legal defense.

Jones spent her teen years in Anderson, South Carolina. She earned her bachelor’s and master’s degrees in English from Clemson University, worked as an English instructor at Clemson and then went to the University of Georgia, where in 1996 she completed her Ph.D. in English and focused on American and African-American literature to 1900. After working as an assistant professor in English at Clemson and then Earlham College, she joined the faculty at Wright State in 2003.

Jones credits Wright State with giving her the freedom to incorporate her research into the classes she teaches.

Jones heard Davis speak when Davis came to Wright State in 2009 and plans to hear her speak Sept. 22 at Ball State.

“If the opportunity presented itself to interview her, I would very much love to do that,” Jones said.

Jones said one of the biggest challenges in doing the book project is that Davis is such a major national and international figure, and has a connection to so many different groups, that there is a massive amount of archival material on her around the country.

Jones believes that defining moments in Davis’ life included the 1963 bombing of a Birmingham church by white supremacists that killed four young black girls, the time Davis spent as a student at Brandeis University and in Europe, her social activism in 1960s California and her time as a fugitive.