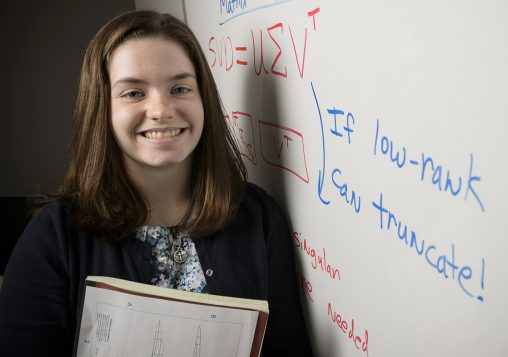 A mechanical engineering major at Wright State, Molly Donovan uses her strong math skills during an internship at Applied Research Associates. (Photos by Will Jones)

Landing an internship at Applied Research Associates is no easy thing. Molly Donovan should know.

The Wright State University engineering student was still in high school when she had her job interview with the defense contractor, then known as BerrieHill Research Corp. The interview involved solving difficult math problems while five company officials looked on.

“You don’t know the problems ahead of time, so you just get thrown in,” she recalled.

However, Donovan’s strong math skills won the day. And she just completed her third straight summer internship with the company, part of a growing swell of Wright State students who have interned there.

The company produces simulations and does other work for the military. The interns primarily develop computer code for production software for military airframes. The work involves knowledge of algorithms, computer science and electromagnetics.

Donovan primarily works on 3D modeling and meshing, which is applying a grid to an object to break it into smaller and simpler problems that can be solved and reassembled to provide the answer to the larger problem. The most challenging thing is dealing with all of the information thrown at her, most of it electromagnetics.

“It’s a lot of hard math and a lot of concepts I don’t learn in school. And meshing is not easy,” she said. “But the scientists here have taught me a lot.”

“I was quite impressed,” Suzuki said. “She was not only able to — but knew — you could solve this with calculus, which is truthfully something a lot of students don’t actually get until they’re out in the real world.”

The 20-year-old Donovan grew up in Kettering. Her father is an aerospace engineer who works at Wright-Patterson Air Force Base and her mother is a school nurse.

“I’ve always been really good at math, and I got to take a lot of math and physics classes in high school. I just found a niche there,” she said.

She wanted to pursue engineering because she likes to figure things out and apply things.

After graduating from Fairmont High School in 2015, Donovan enrolled at Wright State on scholarship. She has a 4.0 grade point average and will graduate in the spring with a bachelor’s degree in mechanical engineering after only three years, thanks to bringing 51 credits to Wright State from Advanced Placement classes in high school. She plans to pursue her master’s degree at Wright State.

Donovan says the professors are student-focused and very supportive.

“They want you to do well,” she said. “If you’re willing to put the work in, you will typically do OK. They definitely always focus on applying things and trying to tailor it to your interests.” 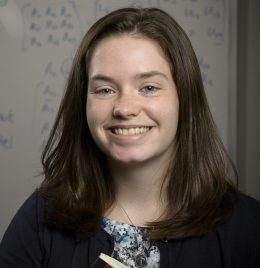 After graduating in three years, Molly Donovan plans to pursue her master’s degree at Wright State.

Judo provides a stress release for Donovan. She has been practicing judo since she was 3 and holds a second-degree brown belt. She also helps distribute groceries every other Saturday at Kettering’s Neighbor-To-Neighbor Food Pantry, which her father helps operate.

She says the volunteer work has taught her to be grateful for what she has and not to judge people who come to the pantry for food because their life circumstances may have been out of their control.

BerrieHill Research Corp., which was founded in 2005 by Jeffery A. Berrie, was recently acquired by Applied Research Associates and is now a division of that company. It has 1,200 employees, with operations around the country.

The internship program at BerrieHill began about 10 years ago when one of the company’s engineering scientists inquired about the possibility of a summer job for a neighbor kid, who was very smart.

Berrie said there has been a significant decrease in the number of people trained in electromagnetics and radio frequency, skills needed by the company but no longer part of the curriculum of many universities.

“We just realized that we’re going to have to home-grow many of our new employees,” he said. “We have everything we need to teach them what they need to know.”

“So the interns learn from the best in the company,” Van said. “And they have been learning very quickly. They are exceptional.”

Suzuki said the students are productive as interns and are already trained when they become full-time employees.