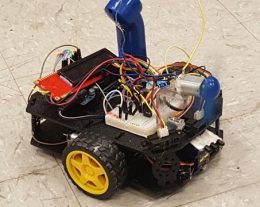 There was a pet robot, a fire-fighting robot, a pack-mule robot and even predator and prey robots. All were autonomous robots made by engineering students as part of Zach Fuchs’ Intelligent Machine Design course in the College of Engineering and Computer Science.

The autonomous robots operate on their own — no human control.

“You just sit them on the ground and you hit ‘go,’” said Fuchs, an assistant professor of electrical engineering who so far has taught the spring semester class twice.

The class is an electrical engineering course, but attracts students from nearly every department in the college, including those in industrial, biomedical, mechanical, civil and computer engineering. There are typically 15 to 20 students.

“The class is geared towards hard work,” Fuchs said. “As long as you’re willing to buckle down and put in the time, you can get something up and working.”

Fuchs has seen a fire-fighting robot that has sensors, drives around and uses a fan or spray to extinguish a candle. A pet robot responded to beacons placed on shoes or belts and followed its owner around. A pack mule bot carried supplies around. And there were predator and prey robots.

“The prey robot tries to get away and the predator robot chases it around,” Fuchs said.

Last year, a freshman engineering student built a mine-detector robot and that detected metal washers that simulated mines and dropped flags on them.

“And he built it from scratch,” said Fuchs. “He built the body out of Styrofoam. He built his own mine-detecting sensor. He made the flag-dropping mechanism. It was extremely impressive that a freshman could do that.”

A graduate student built a laser tag-playing robot by designing a custom-printed circuit board from scratch, having it fabricated in China, soldering everything on the board, programming it and using it to control the robot.

Another student built a dog robot and put a beacon inside of a leash so that the robot would follow its owner around.

“The class is about figuring out how to use sensors, how to connect those sensors to a microcontroller and how to use that information to drive things like motors to do something interesting,” he said.

The beauty of the course is that it gives students “amazing hands-on experience,” he said.

“It’s one thing to read about all this stuff in a book and maybe write a little bit of code or simulation. It’s another to sit down and actually try to make it work,” said Fuchs. “It forces you to think about what’s actually going on.”

Some graduates landed jobs because of the experience they got in the class. One student received an internship in the University of Dayton Research Institute’s robotics section after she mentioned the class in her interview.

For example, Google is actively researching all aspects of machine learning, and Uber is using it to develop self-driving vehicles.

“All of our systems these days are adapting to their environment in some way,” said Fuchs. “These are marketable skills that people want. It’s not just a hobby.”

When Fuchs was in graduate school at the University of Florida, he was part of a team of students who developed an autonomous submarine. Those students went on to careers at Google, Uber, Sandia National Lab, the Naval Research Lab, Bloomberg Data Science and SpaceX, an aerospace manufacturer and space transport services company.

Fuchs earned his bachelor’s degree in electrical engineering from the University of Evansville and his Ph.D. in electrical and computer engineering from the University of Florida in 2012. Before coming to Wright State, he was in the Air Force Research Laboratory’s Sensors Directorate, where he worked on adaptive radar processing to enable radar to adapt to its environment on its own. He joined the faculty at Wright State two years ago.

“Originally, when I went to grad school I wanted to be a professor,” he said. “And these Intelligent Machine Design classes that I created are exactly what I like to do.”