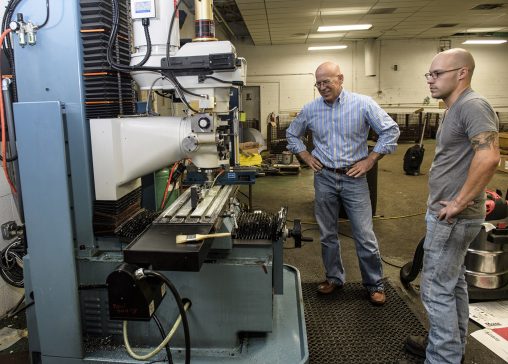 Employees call it the “break room” because it’s where they break things. Namely, they stress metal parts to the breaking point so they can be validated for use in cars, airplanes, missiles, operating tables and other important applications.

It all happens under the roof of Metallurgical Solutions, Inc., a metal-testing lab in Middletown headed by Wright State University alumnus Brian Joyce. He opened the business in 2002 and has since employed many Wright State students and graduates.

A stroll through the sprawling laboratory building reveals an array of muscular tensile machines, which test metal components by pulling them apart. The machines power up, hissing and whirring before snapping metal parts with a loud crack.

Elsewhere in the lab are a lathe, a punch press and corrosion cabinets, which test metal parts with a salt fog environment in accordance with American Society of Testing and Materials (ASTM). An aluminum motor housing to be tested lies in pieces on the floor. Large blue trash bins brim with metal shavings. Other rooms house microscopes and chemical testing equipment.

In addition to chemical analysis and mechanical and corrosion testing, the lab does microstructure evaluation, coating analysis, scanning electron microscopy and consulting. It is considered one of the better failure-analysis labs in the state and perhaps the country. 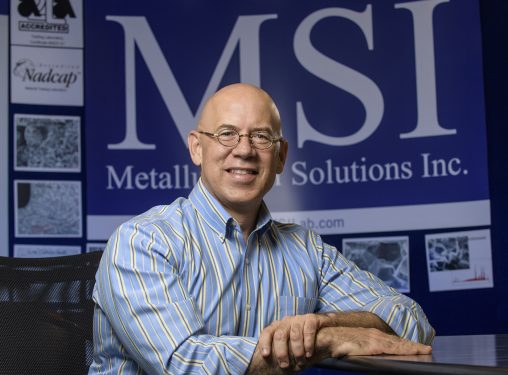 Brian Joyce was a commissioned officer and flight test engineer in the Air Force before he enrolled at Wright State, where he earned a Ph.D. in materials engineering in 2004.

Joyce grew up in Kenosha, Wisconsin. After graduating high school, he joined the Air Force and worked in accounting and finance before being accepted into an aeronautical and astronautical engineering program. He earned his bachelor’s degree in engineering from Purdue University in 1988.

Then Joyce was commissioned as an officer in the Air Force and worked as a flight test engineer at Edwards Air Force Base in California, where he witnessed landings of the space shuttle and met record-setting test pilot Chuck Yeager.

“I saw a lot of things before anyone else knew they existed,” he said.

Joyce later moved to Ohio and in 1992 earned his master’s degree in finance from the Air Force Institute of Technology at Wright-Patterson Air Force Base. He worked for a few years with a defense contractor and then enrolled in Wright State’s College of Engineering and Computer Science, where he discovered materials engineering.

“It was like a second language. It just clicked,” he said.

In 2000, Joyce took a job managing a metals testing lab in Dayton, where he grew the company’s annual sales from $300,000 to $1 million. He earned his Ph.D. in materials engineering in 2004, studying thermo-mechanical processing of titanium.

“At Wright State, it’s a lot more personal. I liked that,” he said. “If you had a problem or a question, the professors were approachable. I learned a lot.”

The company is certified to do testing for the automotive and aerospace industries, including General Electric and its suppliers.

“Dr. Joyce is one of our early Ph.D. graduates who has made quite a name for himself and his business,” said Joseph Slater, chair of Wright State’s Department of Mechanical and Materials Engineering. “I think he is a great example of alumni representing WSU.”

Despite his company’s success, the 55-year-old Joyce worries that the metal-testing industry may soon face a shortage of engineers.

“Not enough people are going into the metals side,” he said. “And there is going to be a vacuum because a lot of the old guys are retiring.”