The rap music video “Let it Out” throbs with energy and passion. A sidewalk, alleyway and roof of a parking garage in Columbus, Ohio, serve as the video’s backdrop as J-Williams pours his heart into the music. Emotion is etched on his face, which is pinched with anger.

“I hated being me. I was mad at my brain. You wouldn’t understand. You couldn’t fathom my pain,” raps Williams. “I need to let it all out.”

J-Williams is actually Jesse Williams. And while he is a fiery rap musician, he is also something quite different altogether — a humble, soft-spoken computer science student at Wright State University.

Williams grew up in Dayton, an only child. His father is an elder at Prayer Garden church; his mother works at a health/medical facility.

Rap music touched Williams at a young age. He sang his first rap song when he was in second grade — “When I’m Gone” by Eminem, who would become one of his favorite rappers.

“It’s a really deep emotional song,” said Williams. “He would paint a very vivid picture in my mind with his words.”

Initially, Williams didn’t think he was that good at rapping, but was encouraged by a friend.

“I started doing my own rap when I was in fifth grade,” he recalled. “I used to rap to myself at home, just walking around the house.” 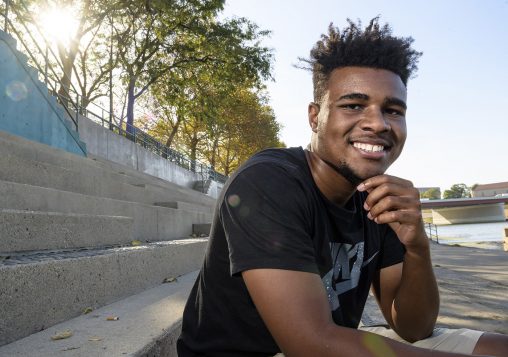 At first, Williams would just freestyle the lyrics and not write them down. But that soon changed. And as he got older, his songs began to reflect his life experiences.

“I wanted to be more in the creating side,” he said. “IT is more like trouble-shooting connections. Computer science is more software development and creating, and I wanted to do that.”

After graduating in 2014, Williams enrolled at Wright State, in part because he wanted to play football on the school’s club football team. He played for two years, as a wide receiver and then defensive end.

“It was a real college football experience,” he said. “But the bigger goal was to get my degree.”

It was the first time Williams had ever taken a computer programming class, and he struggled initially.

“It was all brand new to me,” he said. “But once you get in there and practice programming, it just gets into your memory. You start to understand and get it real well.”

In addition, Williams excelled in the Discrete Mathematics class, which is useful in computing and emphasizes mathematical induction, recurrence relations, asymptotic behavior of functions and algorithm analysis.

“They have a lot of ways for a student to get help if they need to get help,” he said.

As Williams worked his way through Wright State, his rapping began to bloom.

He recorded songs at the home of a friend on sophisticated, high-tech recording equipment and had it edited at a sound studio. He has recorded with rapper King Los, who signed with RCA, and Mark Battles, who signed with Quality Control Music. Williams has more than 25,000 “plays” on his songs online and 40,700 followers on Twitter. His dream is to make a career out of rap and go on tour.

Of his rap songs, Williams’ personal favorites are “Heartbreak” and “Let it Out,” which he wrote about a year ago to express feelings about being bullied and the familiar adolescent pangs of not being the most popular person.

“It was a time when I didn’t really like being myself,” he said. “I felt like I had to let it out.”

He says he hopes his songs help others get through the challenges of life. He plans to shoot several more videos by the end of the year.

If a career in rap music doesn’t pan out, Williams hopes to use his computer science degree in web design or to develop software for video games and apps, possibly even creating a new music app. He is poised to graduate next fall.

“I’m really excited about the future,” he said.