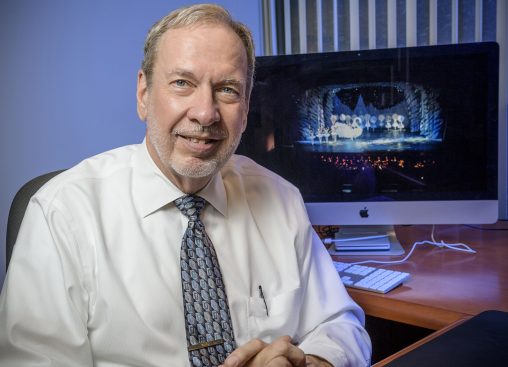 In 1995, Herb Dregalla was asked to be the conductor of the annual “Nutcracker Ballet” in Lincoln, Nebraska, a production that features live symphonic music and 150 dancers. It was a completely new gig for the longtime musician, and he admits to being more than a little nervous.

“It was intense for me,” Dregalla recalls.

This year, the Wright State University music educator and associate dean will conduct the “Nutcracker” for the 23rd straight year. But it may be his final hurrah in the orchestra pit.

“I’m getting arthritis. My left shoulder is hurting,” said Dregalla, associate dean for students and curriculum at the College of Liberal Arts. “Last year I did it and my shoulder was questionable. It’s a two-hour show, and the first act is essentially nonstop.”

So Dregalla will get cortisone shots in his shoulder before leaving for Lincoln to conduct the three “Nutcracker” performances, on Dec. 16 and 17.

The “Nutcracker Ballet,” which includes the popular “Nutcracker Suite,” is performed at the 2,500-seat Lied Center for Performing Arts on the campus of the University of Nebraska. It is always a sellout.

Prior to the “Nutcracker” performances, Dregalla receives a recording from the soloists so he can look at the score and figure out how fast, slow, loud and soft the music must be.

“That does change every year,” he said. “So if I don’t get that music in advance, there is no way of knowing. I don’t see the orchestra until the dress rehearsal.”

Dregalla has just one day to synchronize the musicians with the dancers. Once the performance starts, he is in control of virtually everything that happens.

A few years ago — as the first act was ending — the airborne “swan” got tied up in the cables and was going off into the distance but didn’t quite get there. Dregalla was able to slow the music down until stagehands could get the swan untangled.

Dregalla grew up in the Cleveland suburb of Parma, the son of a father who was the head of the detective bureau for the Cleveland Police Department. Dregalla began playing the clarinet when he was in the fourth grade and by high school had decided he wanted to become the director of a concert band.

After earning his bachelor’s degree in music education from Baldwin Wallace University, Dregalla auditioned for and was accepted into the West Point Band, the U.S. Army band stationed at the United States Military Academy.

Stationed there for nearly three years during the Vietnam War, Dregalla played in parades and at football games and other ceremonies. He remembers Tchaikovsky’s “1812 Overture” played during the Fourth of July concert at West Point being punctuated by the firing of real cannons.

Dregalla went on to earn his master’s degree in musicology from the Manhattan School of Music in New York City in 1972 and later his Ph.D. in music education from Case Western Reserve University.

He taught band in public schools for five years, then taught at Austin Peay State University and Nebraska Wesleyan University in Lincoln. He joined the faculty at Wright State in 1998.

While in Nebraska, Dregalla played in professional orchestras, including the Lincoln Symphony and Omaha Symphony. Then he was appointed music director of a professional concert band, the Lincoln Municipal Band.

The “Nutcracker Ballet” in Lincoln started in 1985 with the music initially provided by the Lincoln Symphony Orchestra. In 1995, a friend of Dregalla’s put in a bid to take over the “Nutcracker” with the Nebraska Symphony Chamber Orchestra providing the music for the Lincoln Midwest Ballet Company and invited Dregalla to conduct it.

“It’s fun to do it in Lincoln because for me all of the players in the orchestra are my friends,” Dregalla said. “I used to go out and play in orchestras with them.”

Many of the parts in the performance — including major roles — are played by young students. Students in the fifth grade may first play the part of mice, then go on to play soldiers and then bigger roles until their senior year in high school. Dregalla’s daughter, Heather, was one of them.

“It was designed specifically for those children to have the opportunity to perform that music at that level,” said Dregalla. “It was fun to be there, and she was right there dancing.”

His daughter, Heather, who is now 36, earned her bachelor’s degree in psychology and master’s in mental health counseling at Wright State. She danced with the Emerald Jazz at basketball games and later coached the dance team.

Dregalla said the “Nutcracker” Suite is perhaps the most recognized of all classical music.

“It’s that piece of music that is well known to people who don’t usually listen to classical music,” he said. “It’s transcended into the pop culture of what music is.”