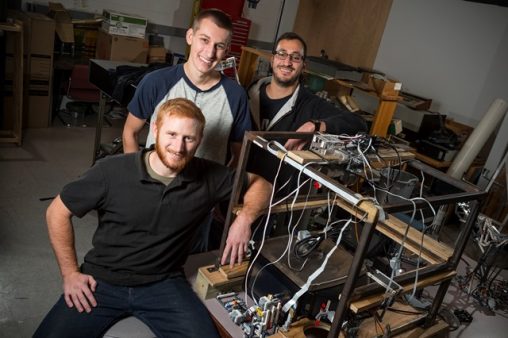 From right: Mahmoud Kamel, Austin Knoblauch and Mark D. Swartz were among the Wright State mechanical engineering students who designed a system for testing retail scales for Hobart. (Photo by Chris Snyder)

The students — Mahmoud Kamel, of Mason; Austin Knoblauch, of Xenia; Mark D. Swartz, of Germantown; and Essa Almesri — designed a test bed and built a proof of concept for Hobart as part of an internship and senior design capstone project. Other students who complemented the project are Abdullah Alawadhi, Marwan Alameer, Abdalmohsin Alborai, Hamed Alenez and Zach Richardson.

“We’re going to use this,” said Scott Davis, director of engineering at Hobart.

Hobart’s retail scales are used by grocery stores, delicatessens and other businesses in the sale of fresh foods. The scales are programmed to weigh and label a large number of items by entering product numbers. The company has sold about 50,000 scales since 2013.

Hobart’s existing testing system is partially automated, but still must rely on test engineers to physically perform tasks such as removing labels once they are printed. The new system is designed to improve efficiency and precision.

Hobart told the students that the test bed had to be able to automatically turn the scales on and off, take the labels, load the platter with a weight and perform a few other functions. It must also allow the scales to be placed quickly and easily into the test bed so that many scales can be rapidly tested or a single scale tested for an extended period of time.

During the first semester, the students designed the proof-of-concept by brainstorming ideas and coming up with design sketches.

“They had some good out-of-the-box ideas,” said Davis. “It’s refreshing working with young minds that probably have fresher ideas than some of us older folks.”

After designing the test bed, the students created a 3D model and then actually fabricated the test bed, a step beyond what Hobart had requested or expected.

The aluminum, cage-like test bed features sensors, actuators and a microcontroller. It uses a system of cables to simulate putting different weights on the scales.

“The most challenging thing was just dimensioning everything properly, making everything work together and fit together,” said Knoblauch.

Swartz said that once the Hobart engineers gave the students a hand with programming the test bed, the students realized the test bed would likely be used in a production facility and was not just an academic exercise.

Hobart intends to put the test bed through some rigorous testing and then manufacture three industrial-strength versions. They will be used to test scales as the scales come off the production line.

“It’s very repeatable, so you have the exact same tests scale to scale to scale and eliminate any human error,” said Randy Redman, a mechanical engineer at Hobart.

Davis said the new testing system will save the company time and resources and enable it to continue to deliver the best possible products. He said he was impressed with the students’ strong commitment to the project and how much they were able to accomplish in such a short period of time.

Ahsan Mian, associate professor of mechanical and materials engineering who served as a faculty adviser for the project, said the two-semester project benefited the students by enabling them to work on a real-world task in a corporate setting.

“It’s a good example of industry/university collaboration,” he said.

Kamel said the project gave him a sense of accomplishment.

“We could see the project all the way through, and it’s something that’s going to be used in real life,” he said.