Eat an 80-ounce steak in one sitting? No problem. An eight-pound plate of Cincinnati chili? Bring it on. A 30-inch pizza? Child’s play. A 21-scoop ice cream sundae? What’s next?

For Wright State University student Ivan Mendoza, competitive eating is a passion. And while each eating challenge or competition is never really a slam dunk, Mendoza has succeeded in nearly all of more than 50 food challenges.

But if you think Mendoza is all about junk food, you’d be very wrong. He is a health coach certified by the American Council on Exercise and uses the spotlight he gets from competitive eating to advocate for healthy eating and lifestyles.

And he’s a senior who double majors in management and human resources at Wright State who carries a 4.0 grade point average and interns at a local hospital’s employee wellness program.

Mendoza says there is room for competitive eating in a healthy lifestyle. 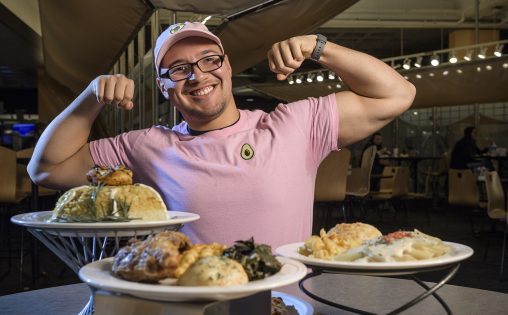 Ivan Mendoza, a senior majoring in management and human resources at Wright State, aspires to be among the Top 10 professional eaters. (Video by Kris Sproles/photos by Erin Pence. Video features “Country Music Revival” by Jamie Suttle)

Mendoza was raised in the Cleveland suburb of Sheffield. He grew up loving food and could always eat a lot of it. When he was on the high school wrestling team, he began to study food and nutrition since managing weight is part of the sport.

“I really became interested in how food affects performance, not only on the mat, not only on the field in football, but in the classroom,” he said, adding that studies show that eating fruits and vegetables can make a person more curious. He said food can also affect a person’s mood and that he feels better when he eats nutrient-dense foods.

Mendoza graduated as valedictorian of his class at Brookside High School and enrolled at Wright State in 2015 after getting a full tuition scholarship.

“I’ve always taken grades as the full priority in my life. So it really paid off,” he said.

Mendoza began competitive eating as a college freshman after spending time in the library studying food.

His first food challenge was at the Sweet Moses ice cream shop in Cleveland, where he finished a six-pound sundae that featured 11 scoops of ice cream topped with hot fudge, caramel, marshmallow cream, pecans, candy sprinkles, whipped cream and cherries.

Next came a challenge at the Melt in Cleveland, where Mendoza took 90 minutes to eat a four-pound sandwich with 13 different kinds of cheese, a pound of French fries and a pound of cole slaw.

Mendoza has eaten 14 egg omelets, five-pound sushi rolls and a monster sandwich at the Hungry Buffalo in Logan, Ohio, that featured 48 ounces of meat, cheese and trimmings on two nine-inch-long rolls. He ate 33 doughnuts during a 36-mile bicycle ride in a competition in Troy.

Mendoza employs different strategies and techniques in each competition, but doesn’t always succeed. He once tried to eat a sandwich called the Loch Ness Monster in a challenge at a restaurant in Pennsylvania.

Mendoza currently does a food challenge about once a week. He has won over $2,000 in free food and estimates his failures have only cost him about $200. He has won cash, gift certificates, T-shirts, umbrellas and even a trophy. 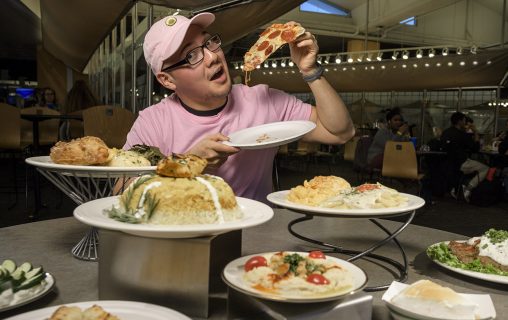 During the week before a challenge or competition, Mendoza will cut back on calories and focus on healthy nutritious meals. He usually eats four meals a day. He cooks for himself, putting together homemade meals of oatmeal, chicken, rice, beans and other healthy dishes. He also eats a lot of fruit, vegetables, lean meats, nuts and legumes.

“The reason I started competitive eating was to show that life is a balance,” Mendoza said. “You can eat ‘clean’ for 365 days, but really that’s not sustainable. So I do these kinds of things to show people that anything can fit into a diet with balance. … I can’t tell you the number of people that tell me that my competitive eating has inspired them to get out of their comfort zone and make change in their life.”

The day before a competition, Mendoza will increase his portions to stretch his stomach. After a challenge or competition, he usually feels sleepy. He burns off the calories of competitive eating by working out in the gym and running, biking, hiking and boxing.

He weighs 210 pounds, down from 260 when he was in high school. He says competitive eating is a sport, like any other sport in which he has competed.

“It’s actually one of the harder things,” he said. “That’s why I like it so much. I like the challenge.”

“He pushes his body and mind to a new level that I’ve not yet climbed,” said Mendoza. “I’m trying.”

Mendoza can’t think of a food he doesn’t like. One of his favorite foods is ice cream, especially more exotic flavors like churro. And he loves avocados, so much so that he has adopted “The Avocado” as his nickname.

“Avocado is classified as healthy, a healthy fat,” he said. “So for me, I’m the Avocado. I’m fat, but I’m healthy fat.”

On this particular day, Mendoza is sitting at a cafeteria table at The Marketplace in Wright State’s Student Union for a photo shoot. He is dwarfed by a small city of food — pepperoni pizza, macaroni and cheese, pasta alfredo, hummus, fried chicken, a pierogi, cherry cheesecake and lemon meringue pie.

He seems right at home.