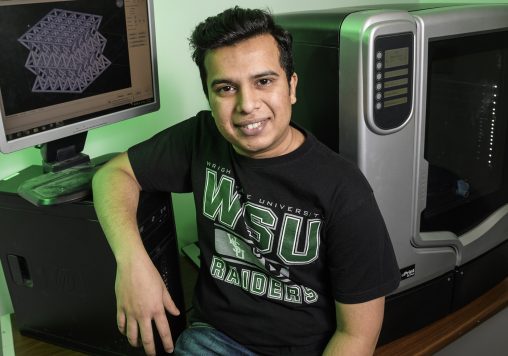 He liked to draw cars as a boy growing up in India. The alluring curves and angles of Porsches, Lamborghinis and Corvettes were irresistible to the artist in Sagar Sangle.

Then one day his father suggested Sangle dig more into his hobby and begin drawing the engines, transmissions and other internal components so he could learn about them. That was his first step down a path into the world of mechanical engineering.

Today, Sangle has his master’s degree in mechanical engineering from Wright State University. He teaches middle school students interested in pursuing careers in engineering about design for 3D printing, manufacturing design and robotics. And he is continuing his research into complex structural designs that are optimized for energy absorption. They have various weigh-sensitive applications in the aerospace and automotive industry.

Sangle grew up in Maharashtra, a state in west central India best known for the sport of cricket, delicious food and the Bollywood film industry. He played a lot of cricket as a boy and to this day remains active in sports, preferring to be a participant over a spectator.

Sangle earned his bachelor’s degree in mechanical engineering in India in 2013. Since many of his relatives were living in North America, he elected to pursue his master’s degree in the United States.

He researched universities in California, Texas, Michigan and Ohio, choosing to attend Wright State because the engineering program had a good reputation and was affordable. He says he received strong support from faculty and advisers at Wright State and even worked as a graduate research assistant.

“I didn’t ever regret my decision,” he said. 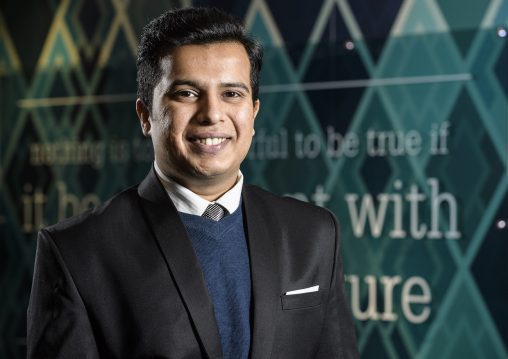 Sagr Sangle’s master’s thesis focused on the use of 3D printers to design and test scalable 3D-printed cellular structures optimized for energy absorption.

During his first year at Wright State, Sangle discovered the University Center of International Education, which enabled him to meet more students from the United States and other countries. He got a campus job as a cultural ambassador and an international orientation leader.

Sangle’s master’s thesis focused on the use of 3D printers to design and test scalable 3D-printed cellular structures optimized for energy absorption. These lattice structures are lighter, have less mass, are more resistant to stress and impact, and are typically less expensive than conventional structures.

When 3D-printed in metal, lattice cellular structures can be used as a safety feature in the manufacture of aircraft and automobiles. Crumple zones in an automobile made of metallic cellular lattice structure absorb impact better and thus improve protection of passengers.

After earning his master’s degree in the spring of 2017, Sangle landed an internship at Wright State that enabled him to continue his research. He also got a job as an instructor at Central State University, teaching middle school students design for additive manufacturing or 3D printing as well as robotics.

“It’s an amazing thing,” he said. “I was actually not so much into talking, but teaching has improved my professional personality. I became more confident, outspoken and engaging. I really like this profession as an instructor.”

Even though engineering has become his career, art is still in Sangle’s heart. He produces sketches and paintings of nature and a wide variety of other subjects. Nearly every weekend he creates a new canvas.

“I love to paint because it’s a good stress-buster,” he said. “It makes you feel happy, and at the same time your house looks nice. And you get free art.”