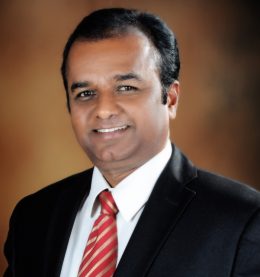 Anil Gopinathan earned a master’s degree in mechanical engineering from Wright State in 1999.

It was the perfect storm of self-discovery and opportunity.

During his high school years, Anil Gopinathan realized he had a passion for mathematics and the sciences. At the same time, the economy in his native India had just started opening up for foreign investments, making engineering a profession that offered huge opportunities for career growth.

“My interest just happened to get aligned with the transformation the country was going through at that point of time,” Gopinathan recalled.

So he followed an engineering path that took him through Wright State University. Today, the Wright State alumnus oversees multiple Engineering & Technology Centers in India employing more than 600 engineers for Ingersoll Rand, a $13.5 billion corporation that designs, manufactures, sells and services industrial and commercial products worldwide.

Gopinathan was one of the first master’s degree students of Joseph Slater, chair of the Department of Mechanical and Materials Engineering in the College of Engineering and Computer Science.

“Clearly the student has exceeded the teacher in this case,” Slater said with more than a little pride at Gopinathan’s accomplishments.

Engineering is in Gopinathan’s DNA. His father was an engineer who worked for the Indian Federal Department of Telecommunications. Gopinathan earned his Bachelor of Technology degree in mechanical engineering from the Government College of Engineering at Trivandrum, Kerala, in the southernmost tip of India.

After working as a mechanical design engineer for automaker Ashok Leyland in Chennai, India, from 1991 to 1995, he took a job in Bangalore as senior design engineer and rose to a managerial role at BPL-Sanyo Technologies, a fast-moving consumer-goods company.

In 1997, Gopinathan enrolled at Wright State, drawn by the opportunities in aerospace research and by his undergraduate classmates’ endorsement of the university, the faculty, the research, job opportunities and the presence of an Indian community in the area.

While at Wright State, he landed a teaching assistantship and a co-op job with a jet engine manufacturer, where he worked on structural and thermal analysis of jet engine components.

“It helped me put my design skillset to work on actual highly engineered products and understand the expectations and work culture of a U.S. organization,” he said.

Gopinathan also received a co-op opportunity at Tecumseh Products Company in Tecumseh, Michigan, and after earning a master’s degree in mechanical engineering in 1999 was offered a full-time job at the $2 billion global HVAC compressor manufacturer.

“That was a good break in my career,” he said.

For the next nine years, Gopinathan would work as a design engineer and progress to the role of director of engineering. In 2008 he was named vice president of engineering and put in charge of leading the engineering teams and global technology center at the company’s locations in India. During this tenure he was also awarded six U.S. patents for innovative designs.

Since 2014, Gopinathan has served as vice president and general manager at the centers, overseeing a team of more than 600 employees in the mechanical and software engineering design and development domain.

Since Gopinathan took the post, the centers have grown by 50 percent. He has managed project resources, progress, completion timeframes and budget while consistently exceeding operational performance targets.

“Driving this team to perform beyond their potential is most gratifying to me,” he said. “I feel proud of their achievement when their ideas become product features that provide valuable solutions to our customer’s problems.”

Gopinathan says the culture at Wright State was highly supportive and credits it with helping him adapt to the U.S. corporate ecosystem. The courses covered a wide range of topics, and the balanced theory and lab curriculum gave him a better understanding of the material, he added.

“Be it the international office or the faculty in the engineering school, all the staff at the university made me feel very comfortable and were always available for any support,” Gopinathan said.