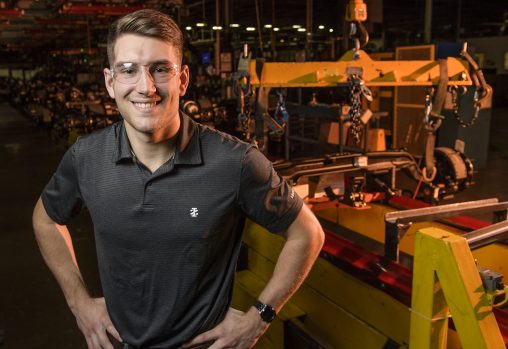 A yearlong labor of love. That’s what it was for Wright State University mechanical engineering student R.J. McCoy in helping design a new axle line at Navistar’s massive truck-making plant in Springfield, Ohio.

And when the time came to begin production on the new line last July following a two-week plant shutdown, there were more than a few butterflies in his stomach.

“It was pretty nerve-wracking,” said McCoy, who arrived at the plant at 5 a.m. to watch his work come to life. “But a couple minutes into it, it started to feel a little better. Then the nerves went away.”

The axles are married to the truck frames, which then march down the main production line to be fitted with wheels, cabs and other parts.

As part of his internship with Navistar, McCoy not only designed the layout for the subassembly of axle suspensions, he designed the concept for brake housing subassembly and the geometry for the overhead hoist and rail system.

“I feel like it was a very successful project. I’m proud of our team,” said McCoy, whose team included fellow Wright State senior mechanical engineering student Hunter Johnson of Springfield. “Everyone collaborated really well and put in a lot of effort to make this successful.”

Navistar is a leading manufacturer of commercial trucks, buses, defense vehicles and engines. About 1,500 workers work at the Springfield plant.

The factory floor is a sprawling forest of steel — spider-webbed with yellow and orange girders. Air hoses dangle from above like snakes. Bouquets of colorful hoses and cables sprout next to the production line. There are gangways, conveyors and fields of steel rollers. Forklifts prowl the floor, emitting whines and beeps.

McCoy had to design the line so that it was flexible enough to handle equipment of differing lengths as well as differing geometries of axles and suspension ties.

“There are an uncountable number of variations that you can see on these axles,” said McCoy. “Trying to come up with different ways to accommodate that was very challenging, but our team did a really good job.” 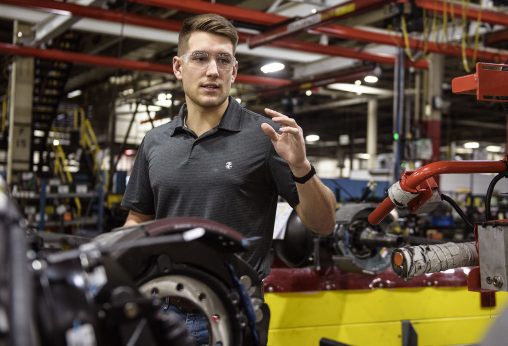 R.J. McCoy fell in love with engineering at Wright State, inspired by the opportunity to work with computers and to do design work.

The line also had to be configured in a way that ensured it would run at an efficient speed, avoiding any costly worker downtime. The line moves at 4.47 feet per minute and spits out about 75 vehicles a day.

“We were in here every day at 6 a.m., dropping different axles on it, seeing how they fit, what interferences there were,” he said.

McCoy grew up in Englewood. His father is an electrician who works for ESI Electrical Contractors and helped with the electrical work on the renovation of the Dayton Public Library. His mother is marketing coordinator in Wright State’s Office of Marketing.

McCoy excelled in math at Northmont High School and after graduating in 2013 enrolled at Wright State.

“I liked Wright State because it was local,” he said. “I’d seen the campus and liked the campus. It wasn’t too overwhelming, but it was big enough to make me feel like I was at a university.”

At Wright State, McCoy fell in love with engineering, lured by the opportunity to work with computers and to do design work.

“My years in the engineering program have been really good,” he said. “I especially like a lot of the technology they give us. For example, they give us a lot of software — very, very expensive software they give us access to.”

McCoy started his internship at Navistar just before the fall semester of 2016. He says it has given him experience in project management and working with contractors as well as developing networking skills. He is scheduled to graduate in the spring of 2018 and hopes to work for Navistar after graduation.