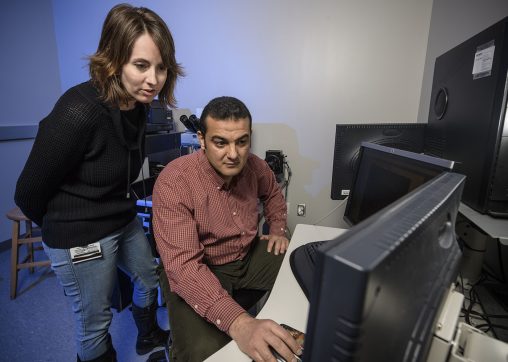 The study by Elbasiouny, Shaker Dukkipati and Elbasiouny’s team of researchers was published in The Journal of Physiology, a peer-reviewed scientific journal founded in 1878. The journal has published papers from more than 40 Nobel laureates.

Elbasiouny’s research could help develop new treatment options for Amyotrophic Lateral Sclerosis (ALS), commonly known as Lou Gehrig’s Disease for the New York Yankees star who was struck down by it.

ALS starts with the progressive loss of muscle function, followed by paralysis and ultimately death due to inability to breathe. Currently, there is no cure for ALS and no effective treatment to halt or reverse the progression of the disease. Most people with ALS die within three to five years from when symptoms first appear.

“We’re very desperate to find a treatment for this disease,” said Elbasiouny. “It is one of the most difficult and most debilitating problems in neuroscience.”

The new study is the first to show robust evidence that motor neurons change size over the course of disease progression and that, crucially, different types of neurons experience different changes. It shows that motor neuron types more vulnerable to the disease — they die first — increase in size very early in the disease, before there are symptoms.

Elbasiouny said the next step in the research is to focus on the ALS-resistant cells to try to understand how they are successful. The goal is to try to find a way to predict ALS or diagnose it in its earlier stage and come up with treatments to slow down the cellular response to ALS or actually reverse it.

“It could lead to a novel treatment for the disease,” he said.

Elbasiouny’s research is supported by a five-year, $1.6 million National Institutes of Health grant. It involves the use of mouse models of familial ALS, high-powered microscopes and computer-generated, three-dimensional measurements of motor neuron cells. 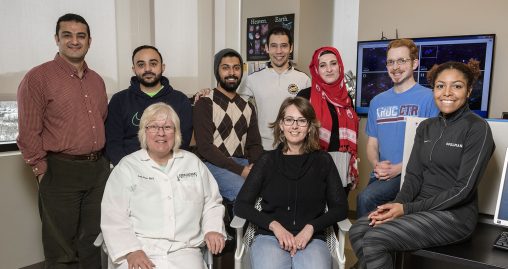 Elbasiouny said a significant byproduct of the research was the development of an improved technique to separate the different sized/type cells, something other researchers can begin using.

“I think it will improve our ability to study motor neurons in general,” he said. “Our conclusions will be more refined now because we can look deeper.”

Elbasiouny earned his bachelor’s and master’s degrees from Cairo University in Egypt and his Ph.D. in neuroscience at the University of Alberta in Edmonton, Canada. He joined the faculty at Wright State in 2012 after a postdoctoral training at Northwestern University in Chicago.

An assistant professor of neuroscience, cell biology and physiology, Elbasiouny has joint appointments in the College of Engineering and Computer Science, the College of Science and Mathematics and the Boonshoft School of Medicine.