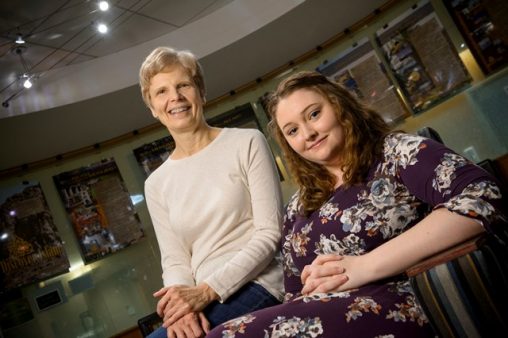 A pilot mentoring program in Wright State University’s College of Liberal Arts that matches selected students with professionals in the outside community promises to increase student success in entering the workforce.

The mentors include local professionals from business, information technology, consulting, management and nonprofits. The students are majoring in such things as international studies, mass communication, English and urban affairs.

“Where we could make matches where the backgrounds are very similar, we did so,” said Jennie Buckwalter, assistant dean for community and student engagement who implemented and oversees the mentoring program. “The mentors are all really excited to mentor these students. They are well-networked and connected.”

Buckwalter said many students approaching graduation haven’t given much thought as to how to land that first career job.

“Sometimes our students are so busy and so focused on getting the grades and getting through the term that it’s hard to invest in time geared toward their futures,” she said. “Any student who is looking to be successful upon graduation, securing that first job and making a good lasting impression would benefit from this program.”

The students have also been given program handbooks. And they have at their disposal the resources of The Center for Liberal Arts Student Success (CLASS), which combines advising, faculty/student relationship-building, peer mentoring and career counseling.

The mentoring initiative is the brainchild of Linda Caron, dean of CoLA, and Travis Greenwood, president of the Wright State University Foundation Board.

Greenwood earned his bachelor’s degree in communication from Wright State in 1984 and his master’s in administration from Central Michigan University in 1991. He has worked as a defense contractor and is co-founder of The Greentree Group, a growing strategic technology consulting company headquartered in Beavercreek. 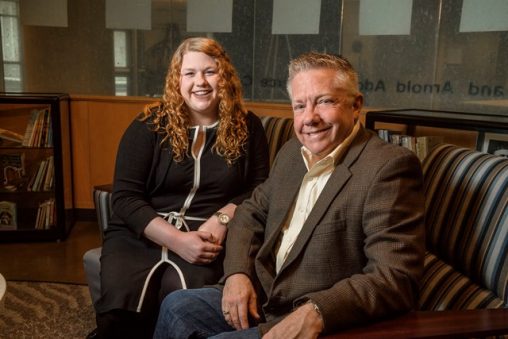 Jenna Coulombe, a criminal justice and political science major, has been mentored by Travis Greenwood, president of the Wright State Foundation Board. (Photo by Erin Pence)

About 10 years ago, Greenwood began teaching a class at Wright State designed to help students transition from college into the business world. He said the vast majority of students were unprepared to do so.

Greenwood said the professional mentoring program is special because it’s one-on-one. And he said local professionals are willing and eager to mentor students.

“We’re going to help these students be much more successful than they would have been,” he said.

Greenwood is one of the mentors and is currently mentoring Jenna Coulombe, a criminal justice and political science major from Centerville.

Coulombe, who expects to graduate in 2019, is thinking about going to law school or getting a job helping former offenders re-enter society.

“I was interested in the mentoring program because I believe that the knowledge I acquire in the classroom is extremely valuable, but I don’t think the classroom can teach everything,” said Coulombe. “So I really was interested in the mentor program to get connected with somebody in the community that could teach me professional-development skills that I might be missing.”

Coulombe is a first-generation college student.

“I don’t really have anybody else to turn to about higher-education questions, career-related questions, strategic moves in my career,” she said. “It’s helpful to know that I’ll always have Travis to contact.”

Kayla Mosley, a junior English literature major from Greenfield, paired up with Kathleen Hinders, who recently retired as the chief financial officer at Crown Packaging Corp. in Kettering. Hinders is a certified public accountant but also has a degree in English from Wright State.

“I think it helps the students if they understand what businesses are looking for,” said Hinders.

Mosley said Hinders has given her good career and job interview advice.

“I definitely feel like I have more real-life professional knowledge rather than just academic,” said Mosley. “And I feel much more prepared in going in for job interviews.”

Greenwood has had Coulombe list and discuss her personal and professional values.

“It really got me to think about when I do enter the workforce what are some things I would like to get out of the job,” Coulombe said. “What sorts of positions am I going to feel fulfilled in and be happy and do my best work?”

Greenwood said students need to make sure their values match the job they pick or else it won’t work.

The two have also discussed leadership qualities, what to look for in employer health care and other benefits, and a company’s cost of employing people.

“She has to be able to convince that employer what the value is that she’s going to bring to that organization,” Greenwood said.

The pilot program has been deemed successful and will be expanded to more CoLA students fall semester.

“We absolutely want to recruit more students and mentors to grow the program,” said Buckwalter.