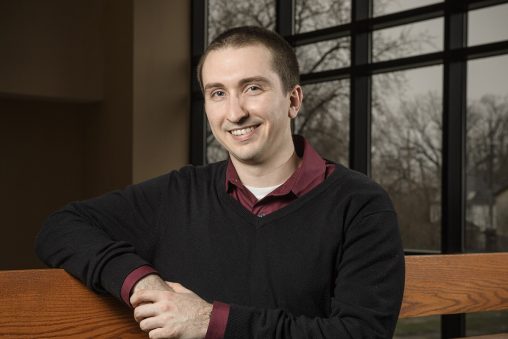 It was while working with children with autism at a clinic in Columbus, Ohio, that became a life-changing moment for Joshua Sensenbaugh, a student at Wright State University’s School of Professional Psychology.

Sensenbaugh’s career interest suddenly veered to pediatric neuropsychology, which deals with how the brain affects behavior in children and impacts different disorders.

“I actually didn’t think I had a chance of getting the position,” he said.

The academy’s mission is to advocate for the rights and appropriate assessment, education and treatment of children and adolescents; advance training and education in pediatric neuropsychology; support examination of competence in the field; and establish collaborative relationships with other professional organizations.

Sensenbaugh graduated from Miamisburg High School in 2013 as valedictorian of his class. A first-generation college student, he attended The Ohio State University in hopes of becoming a neurologist.

But he soon transferred to Wright State and earned his bachelor’s degree in psychology with a concentration in behavioral neuroscience and minor in business in 2017.

He was then accepted into the School of Professional Psychology and is pursuing his Psy.D.

“I love the mission of SOPP, incorporating diversity into your work,” he said. “I don’t think you can ever be fully culturally competent in everything. You have to always work on it throughout your life. Joining this program has jump-started it for me. And the faculty members are so helpful, not just giving us the information, but challenging us.”

After graduation, Sensenbaugh would like to do postdoctoral work in pediatric neuropsychology, become a board-certified neuropsychologist and eventually work in private practice.