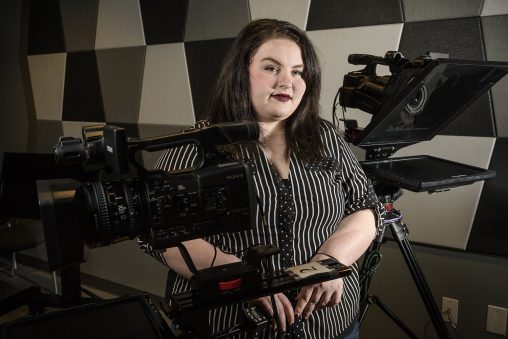 It turns out that putting students in Wright State University’s New Media Incubator and turning them loose in a studio and control room with video cameras and other state-of-the-art equipment can help them learn French.

It was a research project conceived by communication studies major Amanda Harris, who works as an intern in the incubator. She had the beginning French students work on their French by producing storytelling videos that became their final presentations in French class.

“One group in particular was hugely engaged and all ended up with A’s at the end of the semester,” said Harris.

Harris’ research caught the attention of organizers of the Computers and Writing Conference at George Mason University in Fairfax, Virginia. She was invited to present her findings at the event, which was held from May 24 to 27.

The theme of the conference was “Digital Phronesis: Culture/Code/Play,” with submissions focusing on the intersections of formal learning and embodied experience. Harris’ presentation involved how to use digital media to support interdisciplinary collaborations through active-learning strategies.

Harris called her acceptance to present at the conference “huge for me.”

“It feels good to me personally that it is something other people care about because it’s something I very much care about,” she said. “I think the way that we teach can be improved upon.”

In the project, the French students not only learned and practiced French, but they did it while learning how to produce videos — from writing the scripts, identifying props and editing the videos. One student group did a French version of the television show “Family Feud.” Others did a news broadcast and biographies.

“One video got shown in French class because it was just that good,” said Harris.

More importantly, she said, the students were deeply engaged in the project and having fun as they learned French.

“People want to learn when they’re having fun,” said Harris. “The students spent an entire three months coming in to the incubator once a week, sometimes twice a week. They were going over the vocabulary and talking to me about what they were learning.”

Harris said the learning project can also be applied to other areas. In fact, a group of students recently used the incubator to learn organic chemistry, producing a “Jeopardy” television episode based on chemistry questions and answers.

“It was funny, but they were learning,” said Harris. “You can teach creatively in almost any setting. You may have a group of students that might not get math, but if you engage them in a different way, all of a sudden it clicks.”

Harris, 26, is a first-generation college student. Her father owns a heating and air conditioning business, and her mother owns a landscape design company. Her family moved from Hamilton to Lebanon, Ohio, when Harris was 13.

Before graduating from Lebanon High School in 2010, Harris enrolled at Sinclair College to study art history. She graduated with an associate degree in fine art in 2012.

“I’m a firm believer that art, music, books all tell the story of the time,” she said. “So I was very interested in preserving that.”

After taking a few years off school to recharge her batteries, Harris enrolled at Wright State in 2016. She is majoring in communication studies with a minor in French.

Harris is studying digital media, which includes text, photos, audio, video and other content from television, newspapers and magazines that can be transmitted over the internet or computer networks.

“For me it means looking at how those things affect our lives. They can impact it very positively, and that’s a lot of what I look at,” she said. “There are some huge, huge advantages — especially surrounding education — that people don’t think about.”

Harris would like to go on to graduate school and study English or the humanities. She ultimately wants to teach at the college level and write research papers.

“I love doing research. I love figuring things out,” she said. “And I really like observing people.