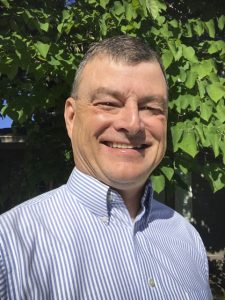 Mark Winters majored in secondary English education and served in the Army ROTC as a student at Wright State.

Nighttime rocket attacks. Improvised explosive devices. Enemy ambushes. They were all part of Mark Winters’ world when he served as a U.S. Army infantry officer in Afghanistan more than 10 years ago. Today, the Wright State University alumnus is retired and living in Idaho. But he still hears echoes from the past.

Winters volunteered for a combat tour as an infantry brigade mentor and trainer in Khowst, Afghanistan, which sits in the eastern part of the country along the Pakistan border. He was in charge of training and mentoring an Afghan National Army brigade commander, the equivalent of a one-star general. Winters also led 96 U.S. Army infantry soldiers deployed across four provinces and was senior officer of a forward operating base.

“You learn a lot about yourself,” said Winters, who was awarded the Bronze Star for his service. “Since I was in charge, I attempted to be decisive and calm when in contact with enemy forces, so the soldiers with me would also be calm and let their training kick in. The enemy contact we normally had was nighttime rocket attacks on our base, ambushes during convoys in mountain passes and occasional IEDs.”

Winters was awarded the Bronze Star for exceptionally meritorious service in Afghanistan from June 2006 to June 2007. The honor cited him for a tireless work ethic, a commitment to excellence and for being instrumental in building a professional Afghan National Army.

He mentored the Afghan brigadier general during the planning and execution of combat operations, served as convoy commander through a mountain pass that was the site of enemy ambushes and improvised explosive devices, was instrumental in securing the pass and helped the Afghan army build a base in the center of the pass that significantly reduced enemy activity.

Winters said he was very honored to be awarded the Bronze Star but felt he was really just doing his job.

“As the senior officer, I enjoyed that part because I felt I was in my element as a leader,” he said. “The toughest part was losing someone KIA.”

He was also cited for his leadership and decision-making that preserved the safety of all personnel during two enemy ground attacks and 14 rocket attacks.

It was all part of a 25-year military career for Winters, who retired as a lieutenant colonel and is living in Boise. He has fond memories of his time at Wright State and recently reached out to the university’s Army Reserve Officers Training Corps program to share some of his knowledge and experience with the cadets. ROTC trains students to become commissioned officers of the armed forces.

On May 7, Winters sent an email titled “Thoughts for ROTC Cadets from Alumnus.”

“Over the years, I thought about the mistakes I made and the areas I could have improved upon as a cadet and 2LT to have had a more fulfilling career,” he wrote. “I understand the ’80s were a different time, but some things are universal and still apply today. Here’s what I would tell your cadets, if given the opportunity.”

Winters went on to advise cadets to commit to being their very best and to get in good physical shape by exercising daily. When they take charge of their first platoon, he says, they should talk to their fellow soldiers as a group at least once daily about the tasks for the day and what needs to be accomplished. They should also stress the basics and always work on their own professional development, he said.

Winters grew up in the tiny western Ohio village of Ludlow Falls, the fifth of six children. His father worked his whole life as a welder or in auto-parts factories. His mother was employed for years as a loom operator at Orr Felt in nearby Piqua.

Winters attended Milton-Union Schools from 1969 to his graduation in 1979, when he enrolled at Wright State. Inspired by some of his high school teachers, he chose secondary English education as his major. He said Wright State introduced him to many new ideas and people from different backgrounds.

“Coming from a small farm community, it was an eye-opener sometimes,” he said. “Some of my favorite professors were the ones I was the polar opposite of politically, but they allowed me to frequently challenge and debate them. Wright State was a good place for me to grow and develop myself intellectually.”

Winters joined the Army ROTC when he was a freshman.

“At that time, our country’s situation was fairly precarious – the Soviet Union had invaded Afghanistan, and Iran was holding American hostages,” he recalled. “I thought at the time we would probably be in a war soon, so I thought that if it would come to it, I would like to go as an officer.”

In 1982, he was commissioned into the Ohio Army National Guard and initially served as an infantry platoon leader in the 1-147th Infantry Battalion in Batavia, Ohio. After graduating from Wright State in 1984 —the first person in his immediate family to finish college and get a degree — he attended basic training at Fort Benning, Georgia, and then served as an infantry platoon leader and battalion staff officer in the 4th Battalion, 8th Infantry Division (Mechanized) in Mannheim, West Germany. He was later assigned to the fabled 101st Airborne Division (Air Assault) at Fort Campbell, Kentucky.

Winters says the military exposed him to different cultures in Europe, Saudi Arabia and Afghanistan, and he quickly learned how sheltered he had been growing up in a small town.

“I think being with other cultures helps you understand how the world really works,” he said. “I found that in a lot of ways people are very similar, but at the same time very different. And I gained an appreciation for how blessed we truly are as Americans to have the freedoms we enjoy.”

“To be a good soldier, you have to be committed to learning your job and trying your best to do it well on a daily basis,” he said. “Good soldiers can always be depended upon by their comrades next to them in a firefight or in the motor pool.”