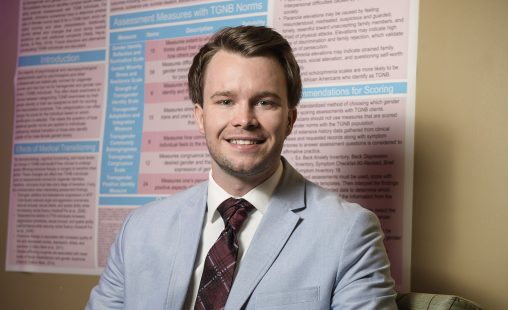 Peyton Jones, who is pursuing his Psy.D. at the Wright State School of Professional Psychology, won two awards for a poster at the 2018 Ohio Psychological Association Convention. (Photo by Erin Pence)

“We don’t technically have any validated way of providing assessment services to these populations,” said Jones. “What do assessment psychologists need to be considering when working with these populations? What are the ways that you can provide the best level of service to these folks?”

Jones grew up in Celina, which provided a small-town atmosphere and strong sense of community. His mother works in the Business Enterprise Center at Wright State’s Lake Campus.

After graduating from Celina High School in 2012, Jones enrolled at Wright State’s Dayton Campus with the idea of going on to medical school and into psychiatry. Instead, he earned his bachelor’s degree in psychology with a minor in sexuality studies and concentration in behavioral neuroscience.

Jones said studying psychology enabled him to better understand human behavior, something he is passionate about.

“And then when I really got into the studies of sexuality, that completely opened up my horizons,” he said. “It really made me want to look more into working with individuals on a variety of sexual-based issues — whether it’s sexual dysfunction, whether it’s sexual trauma or abuse in any form. I knew definitely that that was the focus of the psychology I wanted to do. And it also spurred my interest in working with sexual minority groups, such as the LGBTQ community.”

As an undergrad, Jones was impressed with the number of opportunities at Wright State. He became involved with the Student Government Association, serving as speaker of the House of Representatives in 2014-15. He also served as president of Phi Sigma Phi fraternity and participated in several campus organizations.

“Wright State really strives to push its students to succeed and to achieve,” he said. “And they do it in such a way that it prepares them for life after school. It really prepared me to have the confidence to take on and succeed in grad school.”

Jones was drawn to SOPP because of its focus on diversity and multicultural competency.

“I had a lot of assumptions coming in, a lot of biases,” he said. “I really got challenged early on in the program and was able to take a step back from my own views, look at how my upbringing has shaped me from a smaller rural hometown. It’s really helped just broaden my mind to working with people from all different walks of life.”

The annual Ohio Psychological Association Convention in April features workshops and speakers from around Ohio and the nation. It also serves as a showcase for college students from around the state to display their research, make presentations and attend symposiums.

Jones’ poster presentation, which relied on a review of the literature, looked at psychological assessment norms and the fact that there are no scoring measures for individuals in the transgender or gender non-binary populations — those whose gender identities don’t match their assigned sex at birth, those who don’t necessarily identify as male or female, or those who identify as both.

“If a clinician is not privy to some of the issues that transgender and gender non-binary individuals face day to day, some of their scores that are elevated on certain assessments may be interpreted differently than from what is actually happening,” said Jones.

For instance, clinicians may feel a higher level of mental health concerns for these individuals without taking into account public stigma that may be elevating pressures and stresses, he said.

“If you are battling discrimination and prejudice each day, it’s likely that you might be more hypervigilant, you might be weary of interacting with different folks,” said Jones. “That doesn’t necessarily mean you have a psychological disorder. That means that you live in a world that unfortunately is not always safe or affirming of your identity.”

After graduating from SOPP, Jones wants to work in a private practice doing couples, relationship, sex and family therapy. He also hopes to teach at the college level.