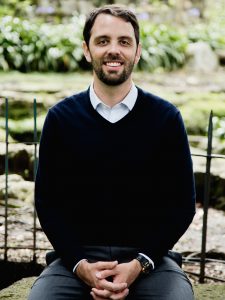 Two-time Wright State grad James Mosher has worked around the world as part of the U.S. Foreign Service.

The Foreign Service is not so foreign to James Mosher anymore.

The Wright State University alumnus has worked in Ukraine, Russia, Afghanistan, Kenya, the Democratic Republic of the Congo and, most recently, Colombia, where he served as an international observer during elections in the South American country.

Mosher, a political officer at the U.S. Embassy in Bogota, was an international observer during the March 11 congressional elections and again during the June 17 run-off presidential election. He traveled outside the capital for both — once to the Caribbean coast and once to coffee country in central Colombia.

“It’s a long day, especially for the poll workers called to serve in a civic process sort of like jury duty in the United States,” said Mosher. “So every polling station has dozens — or even hundreds — of Colombians responsible for administering and counting votes. Of course, we were observing the process the whole time, too.”

The observation of elections has become an important tool in the promotion of democracy. Mosher points out that the U.S. State Department’s mission advances the interests of the American people, their safety and economic prosperity by leading the United States’ foreign policy through diplomacy, advocacy and assistance.

“I think this perfectly encapsulates the work I see my colleagues doing every day, and I feel extraordinarily lucky to have the opportunity to contribute to that mission,” he said.

Mosher grew up in the Dayton area and attended Centerville High School, where he became interested in global affairs after taking a course focused on historic periods and events that had unfolded during the students’ own lifetimes, notably the end of apartheid in South Africa, post-Tiananmen China and the Gulf War.

After meeting with an academic adviser who helped him choose political science as a major, Mosher was drawn to Wright State, all the more attractive for its proximity to a variety of businesses, nonprofits, government agencies and Wright-Patterson Air Force Base, all of which provided opportunities for internships, jobs and other activities.

“I could tell that the value of my education at Wright State would be excellent,” he said. “The quality of my professors was top-notch, and the learning environment provided the tools and opportunities a student needs to excel. I really felt the focus was on learning and developing, and not just in the classroom.”

At Wright State, Mosher took part in the Model United Nations Program, which introduced the U.S. Foreign Service to him as a career option. He also participated in several student organizations and internships that provided opportunities to develop leadership, public speaking and other soft skills that are crucial in his career.

Mosher earned a bachelor’s degree in political science in 2005. Although he had finished the coursework for his master’s degree in 2007, he decided to seek more experience abroad before graduating. So, Mosher joined the Peace Corps and spent two years as a community development volunteer and educator in western Ukraine.

Upon returning to Wright State in 2009, Mosher completed a final project about democratization in Ukraine and graduated in 2010.

Mosher then joined United States Agency for International Development (USAID), the federal agency responsible for administering civilian foreign aid and development and humanitarian assistance. He spent a year on a small military base in eastern Afghanistan, working closely with the U.S. military, the State Department and Afghan colleagues to monitor development projects.

After returning to Washington, D.C., Mosher worked in the Office of U.S. Foreign Disaster Assistance, the USAID office that provides humanitarian assistance to victims of conflict and natural disasters. He focused on East and Central Africa, making several trips to the region to monitor programs.

In 2014, Mosher joined the State Department as a Foreign Service officer, serving his first two-year tour as a vice consul in Moscow.

“In Moscow, I enjoyed the opportunity to return to a part of the world I know well and serve in an iconic city that I had only visited as a tourist while serving in the Peace Corps in neighboring Ukraine,” he said. “The relationship between the United States and Russia is an important and fascinating one, and I highly valued the opportunity to contribute to the U.S. Mission there.”

Mosher says working for the State Department has given him the opportunity to work on a wide variety of topics in many different environments while advancing U.S. interests abroad.

“The most exciting thing about a career in the Foreign Service in general is the constant change,” he said. “The job, scenery, language and living conditions are constantly changing. Every post is different and exciting in its own way.”