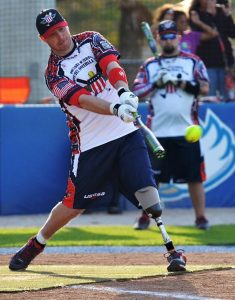 The two games, co-sponsored by the Veteran and Military Center at Wright State, will be played on campus at Nischwitz Stadium on Saturday, Oct. 13, at 9 a.m. and 2 p.m. Suggested donation for admission is $5.

Between games — at 11 a.m. — a ceremony will feature a “WWAST Salute to Gold Star Families.”

Those benefiting from game proceeds include Fisher Houses, which provide a compassionate-care environment for military families to stay together during times of medical emergencies or crises; Honor Flight-Dayton, a nationally known veterans program that transports veterans from World War II and the Korean and Vietnam wars to war memorials in Washington, D.C.; and Combat Outpost Robinson, an Ohio organization that helps 9/11 combat veterans who have from post-traumatic stress disorder.

The Wounded Warrior Amputee Softball Team is not affiliated with other charities with the words “Wounded Warrior” in their names. Since the inception of the amputee softball team, more than 85 percent of its donations have supported programs helping military amputees, amputee children and medical research.