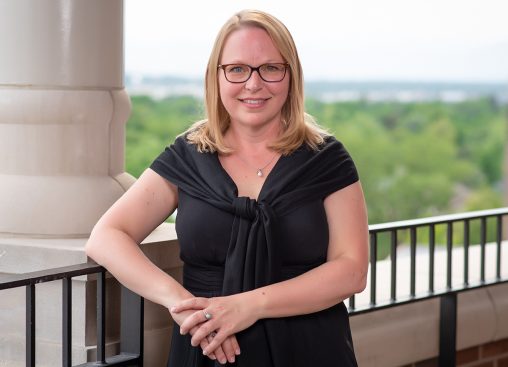 Paula Bubulya, associate professor and associate chair of the Department of Biological Sciences, participated in the HERS Summer Institute at the University of Denver.

It was a confidence-builder for Paula Bubulya, associate professor and associate chair of the Department of Biological Sciences in the Wright State University College of Science and Mathematics.

She said she learned that being a bit introverted won’t stand in the way of her being a strong leader.

“I found my voice. I got such positive feedback,” said Bubulya. “And I discovered that my skills as a scientist are transferrable in assuming top university leadership positions.”

The HERS Institute empowers women to understand their potential and provides them with skills to grow professionally and personally and to lead with their strengths. It is dedicated to creating a diverse network of women leaders in higher education.

Since 1972, HERS has provided training for more than 5,000 women faculty and administrators on the following campuses: Wellesley College, Bryn Mawr College and the University of Denver. More than 30 women with Wright State connections have participated over the years.

Bubulya joined approximately 70 women leaders across the United States at the University of Denver on June 18-30. She was also among 26 of those women who participated in the HERS Luce Program for Women in STEM Leadership.

“I had great teachers,” she said. “They basically transformed me from not knowing anything to really wanting to do this for life and to train other people, to pass on this knowledge.”

At Toledo, Bubulya’s research focused on cell adhesion, where surface molecules enable cells to recognize and communicate with each other. If cell adhesion goes wrong, it can lead to the growth of cancer cells.

One day she picked up a scientific journal and became interested in the expression of genes in the nuclei of cells. She landed a research job at the Cold Spring Harbor Laboratory on Long Island, New York. The lab is a private, nonprofit with research programs focusing on cancer, neuroscience, plant biology, genomics and quantitative biology.

Bubulya conducted research on nuclear “speckles,” structures that provide a model for understanding the functional compartmentalization of the cell nucleus and the organization of gene-expression machinery. Their mysteries offer promise for understanding human disease and potentially for treatment.

In 2005, Bubulya joined the faculty at Wright State. She currently operates a lab funded by the National Institutes of Health.

“Right now I have Ph.D. student Melissa Ward working on a splicing factor called SON,” she said. “This is a huge protein. We don’t know what it does aside from splicing, but we have some idea it’s regulating gene expression in a fascinating way that we hope to publish soon.”

Bubulya said she wanted to participate in the HERS Institute to strengthen her leadership skills. In the HERS STEM program, she and her colleagues met with scientist administrators who advised them on their transferrable skills. For example, writing grant proposals is a form of fundraising.

“It was really eye-opening to realize that,” she said.

Bubulya wants to use her HERS experience to help Wright State hire and retain more faculty of color and women in science.

“I work really hard now on inclusive excellence. That’s one of my driving passions,” she said.

“I would like to make a tailored program process in every college on our campus that will support success for all faculty,” she said.