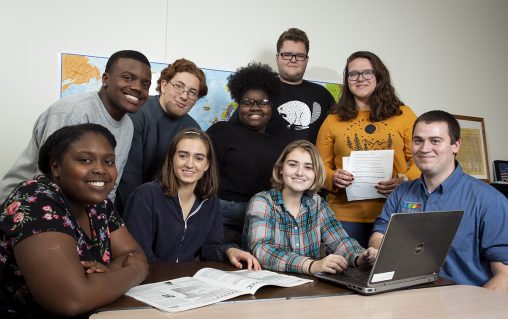 The New York Times mentioned the project as part of the newspaper’s collection of ideas from schoolteachers around the nation on how to use the mid-term elections as an opportunity for teaching and learning.

Smith’s 11th-grade government students created an online nonpartisan elections guide to educate first-time voters about the process and requirements of voting and to enlighten them about the candidates and the issues.

“Not only did we learn about voting, but we learned how to work together as teacher and student,” said Smith, who graduated from Wright State in April 2018 with a degree in middle childhood education. “It was really cool to see the students engaged with different levels of government that maybe people aren’t as familiar with.”

The STEM school, a Wright State affiliate that opened in 2009, uses project-based learning to teach students in grades six through 12. The current 670 students come from 30 different school districts in six counties. Virtually the entire faculty and staff of the school are Wright State employees.

Smith and his students started the elections project in early October, with the primary goal to engage and support first-time voters.

“The content is: How do I vote when I’m old enough? What does it mean to be nonpartisan? How do we present things fairly without being on one side or the other?” said Smith, recipient of Wright State’s Middle Childhood Education Graduate Student Excellence Award for 2017-2018. “The students did a nice job with that.”

The students used the League of Women Voters as a resource.

“One of their editors came in and gave tips to the students,” said Smith. “The league sends a survey out to each of their candidates, and they don’t edit the candidates’ responses at all. So we did the same thing except the questions that we used we created.” 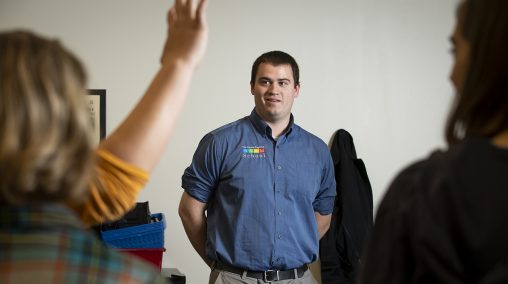 James Smith graduated from Wright State in April 2018 with a degree in middle childhood education.

Umar Atlagh, a student from Miamisburg, said he first had to research what an auditor does before sending out surveys to the auditor candidates.

“To come up with the questions specifically I went to the Montgomery County Auditor’s page and looked at what some of their duties are. And then I formed my questions based on that,” he said. “One of them was what are your plans for the county budget? What do you think makes a good auditor?”

Dayton student Jordan Young sent his surveys to judicial candidates for Common Pleas Court and Juvenile Court, asking their positions on various issues and what their opinion is of the ideal judge.

“The goal of this was not only to inform upcoming voters of what’s going on in their districts and counties, but also inform us about how those things work and give us a good sense of the structure,” Young said. “I think that was very important. Not everyone is going to go and do all this research.”

A big part of the project was creating a website, which has about three dozen pages.

Kettering student Kylie Sauer created many of the navigation buttons for the website, keeping them all gray so as not to subconsciously influence voters by using party-popular red or blue.

Dayton student Trinity Minus said that while the original audience the students had in mind were high school seniors old enough to vote, the survey questions and responses are relevant to all voters.