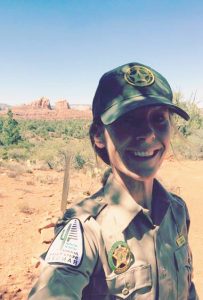 When she was just a little girl, she and her father would take to the mountains of Arizona and search for the Lost Dutchman’s Gold Mine. According to legend, the mine is hidden somewhere in the Superstition Mountains and perhaps is the most famous lost mine in U.S. history.

The only thing Sara Toms-Bergquist and her father ever found was pyrite, an iron sulfide known as Fool’s Gold. But the experience reinforced Sara’s passion for geology.

Today the Wright State University alumna is the earth and environmental education ranger at Red Rock State Park, one of only two such rangers in the state. And her office rubs up against the spectacular tangerine sandstone buttes and canyons of Sedona.

Toms-Bergquist, who grew up in Mesa, Arizona, was first bitten by the geology bug when she received a toy dinosaur at the age of 3.

“I thought all rocks were dinosaur fossils and wanted to spend all my time looking for dinosaurs,” she said.

She did a lot of that in the mountains, where she and her family did a good deal of hiking and camping.

“Literally my whole life I have loved the world of geology, and I owe my parents a lot for supporting my dreams at such a young age,” she said.

After graduating from Red Mountain High School in 2001, Toms-Bergquist joined the Air Force. From 2002 to 2008 she was stationed at Tinker Air Force Base in Oklahoma, where she worked as a surveillance instructor aboard the E-3 AWACS, an early warning aircraft with a distinctive radar dome above the fuselage.

In 2008, she left active duty and moved to Dayton, where she joined the Air Force Reserve at Wright-Patterson Air Force Base. And she enrolled at Wright State to study geology.

Toms-Bergquist said her experience at Wright State was “beyond great.” She said David Schmidt, director of environmental sciences, set her on a career path that would change her life. The geology students received all the support they needed from faculty and became a very close group, she said. 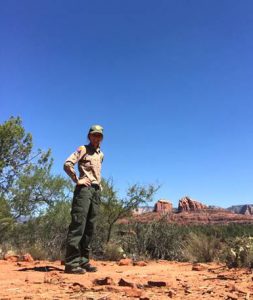 “You knew that on Thursdays everyone would be at El Rancho Grande — faculty included,” she said. “It was like a little family.”

In 2011, Toms-Bergquist graduated with her bachelor’s degree in earth and environmental science, specializing in paleontology. She landed a job as a paleontology park ranger at Caesar Creek State Park near Waynesville, Ohio, and later moved to Charleston and worked as a park ranger for the South Carolina State Park Service.

She returned to her native Arizona in 2017 when she received a special duty assignment in Tucson from the Air Force Reserve. Last June, she was hired as the earth and environmental education ranger at Red Rock State Park.

Red Rock is a 286-acre nature preserve and environmental education center with stunning scenery. It is located on the outskirts of Sedona, a desert town surrounded by red-rock buttes, steep canyon walls and pine forests.

“Most people think of Arizona and think ‘heat, cactus, desert.’ But we have trees, we get snow, and more importantly we have the most beautiful red sandstone mountains in the world,” she said. “We are nestled back within the mountains about 15 minutes south of downtown Sedona and have the most spectacular views.”

Toms-Bergquist, the mother of two young children, is in charge of all the school-aged earth and environmental education programs, including geology, insects, botany, wildlife and archaeology. She also teaches and oversees field trips, education displays and special events such as the park’s Earth Day party.

“What has been neat is that every park I have worked at I have been the only one with a degree in geology,” she said. “Most park rangers have a biology background so I bring a totally different skill set.” 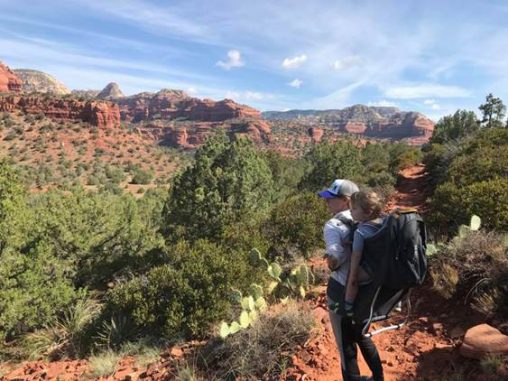 Sara Toms-Bergquist is an Air Force veteran who moved to Dayton to join the Air Force Reserve at Wright-Patterson Air Force Base.

She said the most challenging part of the job as a park ranger is that visitors expect her to know all there is to know about snakes, birds, bugs, trees, rocks and plants.

“You are looked at as the expert on everything so you really have to study and read to have that level of knowledge,” she said.

Toms-Bergquist is working on her master’s degree in space science and planetary geology and hopes to teach at a small junior college at night.

“I love teaching, and the more people I can get interested in geology,” she said, “the better.”