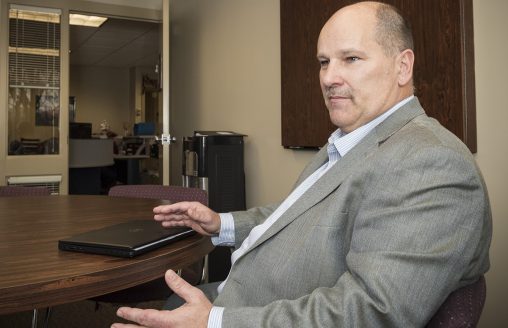 Ben Rhinehart recruits Raj Soin College of Business students to work at Crown Equipment Corp., teaches supply chain management at Wright State and serves on the Corporate Advisory Board of the Department of Information Systems and Supply Chain Management.

Graduates of the Wright State University Raj Soin College of Business do much of the heavy lifting at Crown Equipment Corp., the fourth largest manufacturer of powered industrial forklifts in the world.

“I have a lot of Wright State alumni who work for me. We’ve hired a lot,” said Ben Rhinehart, who heads the western Ohio-based company’s supply chain division and is director of purchasing and trade compliance.

In fact, Rhinehart estimates there are more than a dozen Wright State grads who work in Crown’s New Bremen Supply Chain division as well as one or two student interns three times a year.

“Wright State has got a good program and the people that come here are more committed to the area. When we hire the Wright State students, they tend to stay,” said Rhinehart. “And when these students show up on Day One as full-time employees in Supply Chain, they’re ready to go. That’s huge for us.”

Rhinehart said that many other new employees tend to move on to other jobs after a few years, with most of the Wright State workers being the exception. He said many of them have grown up in the region, have family ties there and want to stay in the area, where a strong work ethic is common. And jobs at Crown can be financially rewarding.

“If you’re sharp, have had a couple of internships, have a four-year supply chain degree, you’re going to start at $60,000 a year with full benefits,” said Rhinehart. “Some of the real go-getters within five to six years are making $90,000-plus a year.”

Supply chain workers manage the flow of goods and services. They are involved in the movement and storage of raw materials, work-in-process inventory and getting finished goods from point of origin to consumption.

Rhinehart spends a lot of time at Wright State. He teaches supply chain management as an adjunct at the Dayton Campus and Lake Campus and serves on the Corporate Advisory Board of the Department of Information Systems and Supply Chain Management.

“Wright State has been very open about working with local industry, so they allow us to be known on campus and recruit the best candidates,” he said. “We do everything we can to support Wright State.”

The 58-year-old Rhinehart took a long and winding road to Crown.

He grew up in Connecticut, graduating from high school when he was only 16. In 1977, he began working at a factory, doing machining and welding for $1.90 an hour.

“I’ve been pretty much working full-time ever since,” he said. “Working the factory job gave me an understanding of what it takes to create things, design things and connect the academic side to the actual shop floor side. So you are able to apply the academics to what’s really happening.”

Along the way, he landed a job with McDonnell Aircraft Corp. in St. Louis, working as a technician in an engineering lab testing airplane parts. He also got his pilot licenses and became a professional pilot and flight instructor.

“Then I got a call from Sikorsky Helicopter in 1984, and they wanted to get into the avionics and weapons systems business,” he said.

Rhinehart did a lot of work with anti-submarine warfare and other classified programs at Sikorsky and learned about outside manufacturing when he bought parts from suppliers.

In 2003, he joined Crown, a privately held, family-owned $3.5 billion global company. He started at the company’s New Bremen, Ohio, plant in supply chain with a $230 million annual budget and 23 employees. Today, he manages a $1.6 billion budget and 115 employees worldwide. Rhinehart also helped Crown expand into China.

“As we grew internationally, we had to ensure we had a compliance program in place to comply with all of the international trade laws,” he said. “So I stepped up to take that on in 2007.”

Rhinehart says supply chain employees can have a dramatic effect on a company’s bottom line because most U.S. manufacturing companies spend 60 percent of their product costs on outside suppliers.

“If you can used supply chain management to save $1 million in purchased goods, for example, all of the those savings add to the company’s profit,” he said. “It’s a position within a company that’s very critical for continuity and to keep the factories running and for their cost competitiveness.”

“There are a lot of options for supply chain students,” he said.