Every Saturday morning, a 75-year-old French woman arrives at the 2nd Street Market near downtown Dayton and makes her way to Rahn’s Artisan Breads, where she buys two butter croissants and two chocolate croissants.

Selling her the pastries is Rahn Keucher, a Wright State University alumnus and bread-making father of four who has been sharing his baked goods from a retail booth at the market for the past 15 years.

A year ago, the woman told Keucher she no longer returns to her native France because all of her family has passed away.

“But every Saturday she comes and gets her pastries and she’s home again,” said Keucher.

The woman is just one of Keucher’s many fans. Besides customers at the market, which is perfumed with the smell of Keucher’s freshly baked bread, restaurants from Centerville to Beavercreek to Troy snap up his baked goods.

Keucher works at his bakery six nights a week, arriving at 9 p.m., scaling and mixing beginning at 10 p.m. and firing up the oven at midnight. The first delivery truck leaves at 5 a.m., the second at 6 a.m. Deliveries to restaurants are finished by 10:15 a.m.

Saturday mornings are spent at the market. 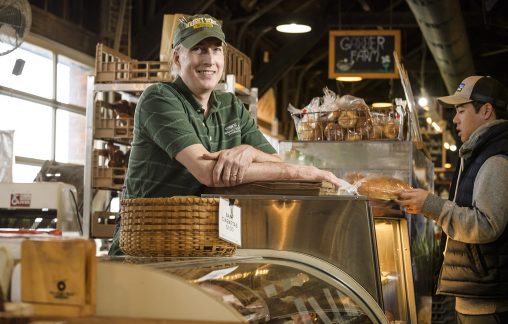 Rahn Keucher, a Wright State University alumnus, sells his bread and other pastries to area restaurants and at a stand in Dayton’s 2nd Street Market. (Video by Kris Sproles / Photos by Erin Pence)

“This is where I get to do fun stuff like three-day sours and laminated doughs and pretzels and all the things the restaurants aren’t interested in,” he said. “The retail here at 2nd Street Market is strong and getting stronger.”

Keucher grew up in an Air Force family. After graduating from Stebbins High School in 1984, he enrolled at Wright State, where he worked as a DJ at the WWSU radio station and served as chair of what is now the University Activities Board in what he called a “big-boy job” for an 18-year-old kid.

Along the way Keucher took a number of economics and statistics classes and earned his bachelor’s degree in human factors psychology in 1991.

“I had some really cool and really supportive professors,” he said. “Wright State was just a really cool environment.”

His wife, Gina, is also a Wright State graduate and is program director of student activities at the university. One of the couple’s sons recently graduated from Wright State and another is a sophomore.

Keucher worked his way through Wright State in what turned out to be the beginning of his cooking and baking career. He landed jobs at Pizza Hut, Bagel Factory and even L’Auberge, a fine-dining establishment that held a coveted and rare four-star rating from the Mobil Travel Guide for 19 years before closing.

“I never quite left the kitchen,” he said. “I’ve never actually had a sit-down, air-conditioned job in my life. Twenty-and-a-half years on third shift is not something I planned on.”

While Keucher was working at the now-defunct Euro Bistro, he helped bake bread for the restaurant as well as seven or eight others. But when his partner decided to stop supplying bread for other restaurants, Keucher set out to start his own baking business.

He sub-let a bakery in Cincinnati and for the next five years would drive from his home in Enon to Cincinnati every night, bake bread and bring it back to Dayton in the morning. In 2000, he began leasing his current space in Dayton, a warehouse-like building on the city’s northeast side.

He then bought a five-shelf, 17,000-pound German hearth oven that had to be assembled on-site and cost $50,000, more than that of his first house.

Keucher’s European-style bread has a much heavier crust than typical breads. And most of his breads have no sugar or shortening or any oil of any kind.

He makes two-pound pretzels that he dips in a lye bath to enhance flavor and color and ties them into that shape some believe represents children crossing their arms in prayer. On Super Bowl weekend, he sells 45 to 50 pretzels twice that size. 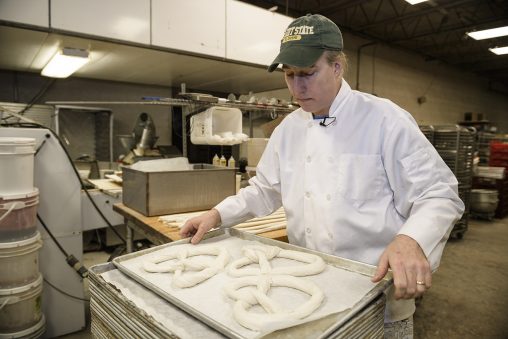 After working in several restaurants, Rahn Keucher decided to open his own baking business, which he operates in a warehouse-like building on Dayton’s northeast side.

Keucher said his decision to get into pastries was a gamble that has paid off. (He spent a week in San Francisco learning how to make croissants.)

Gina Keucher and the couple’s four sons help out at the market on Saturdays. Gina says her husband’s bread is arguably one of the best breads you can find anywhere.

“He would never say he’s as good as he is, but we’ve had long loyal customers and that tells the story,” she said.

The Keuchers also give back to the community.

Many of the baked goods left over from Saturday’s market sales are donated to firehouses and police stations. The Enon Relief Food Pantry also benefits from leftovers, pretzels are donated to the Greenon Band Boosters for sale twice annually, and baskets of bread are donated to silent auctions throughout the year.

Keucher says his career enables him to swing for the fences every day.

“If I mess up, if the ciabatta isn’t very pretty today, I get to make more of it tomorrow,” he said.