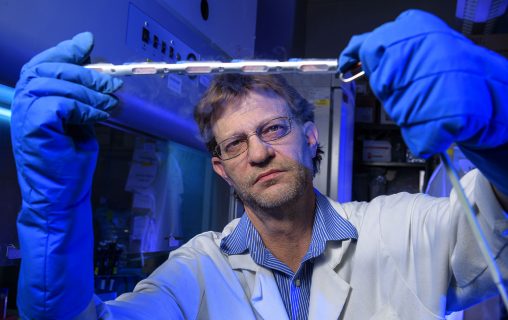 Thomas L. Brown, vice chair for research in the Department of Neuroscience, Cell Biology and Physiology, published his latest research on preeclampsia in Scientific Reports. (Photo by Erin Pence)

Research at Wright State University that advances the study of preeclampsia, a pregnancy-specific condition, is getting international recognition.

A paper on the research by Thomas L. Brown, professor and vice chair for research in the Department of Neuroscience, Cell Biology and Physiology, was published Feb. 26 by Scientific Reports, a prestigious international journal.

Funded by the National Institutes of Health, the findings and paper are the culmination of several years of work by Brown and his team.

Preeclampsia is a leading cause of maternal and infant illness and death worldwide and is responsible for more than 76,000 maternal and 500,000 infant deaths each year. It results from abnormal placental development and leads to a rapid and life-threatening rise in the mother’s blood pressure. Preeclampsia can also impair kidney and liver function and lead to seizures in mothers as well as reduced fetal growth and development, leading to smaller or prematurely born babies.

“To me, it’s a significant scientific breakthrough in the field of pregnancy and preeclampsia because our model is so close to what we see in humans,” said Brown. “We are one of a few labs in the world that is able to achieve placental-specific gene transfer.”

Humans have a high level of a gene-regulated protein, called HIF-1, that is critical for placental development. This protein normally gets turned off in early pregnancy, after the first trimester. When the protein level stays on too long, it has been shown to be associated with the development of preeclampsia.

To directly test the involvement of HIF-1 in preeclampsia, Brown and his team conducted studies on pregnant mice. They made a mutant gene so that HIF-1 could not be turned off during development and thereby created an animal model of human preeclampsia.

“We predicted that if we kept the HIF-1 protein on too long in the placenta, it would mimic what we see in humans,” said Brown.

Brown said that other research models don’t quite mimic preeclampsia because they usually affect the mother’s entire body and not strictly the placenta, the organ that supplies oxygen and nutrients to the fetus.

“We really wanted to get as close to what happens in humans in this animal model,” said Brown. “To do that, we made sure that the HIF-1 gene was only altered in the placenta.”

“For us, it’s extremely gratifying to have identified a gene that appears to play a major role in the development of preeclampsia and to show that it’s a placenta-specific phenomenon,” said Brown. “Something in the placenta has gone wrong, which causes the mom to get high blood pressure and the babies to be small. Having identified a molecular target, we can now determine how to regulate it, to turn it down. We can now look at several exciting avenues of research that could lead to new treatments for this devastating condition.”

“We’re really excited about using our model to look at all of these factors,” said Brown.

The Endowment for Research on Pregnancy-Associated Disorders at Wright State was created by Brown. Although the endowment is in its infancy, reaching the monetary goal would establish a permanent funding source for future research on pregnancy-associated disorders.