It began as a biomedical engineering project to study the materials used for breast implants. But Tarun Goswami, professor of biomedical, industrial and human factors engineering, suggested the students shift the focus and goal of their research to the bra itself.

“A vast majority of women have problems with bras,” said Goswami. “The students are working to determine if there are health effects of wearing an ill-fitting bra and if a better, more properly fitted bra can be developed. This could affect nearly every woman who wears a bra.”

Farah Hamandi, a biomedical engineering Ph.D. student, is organizing the latest stage of the project, which initially included five Ph.D., master’s and undergraduate biomedical engineering students. Then Goswami’s daughter, Rinki Goswami, a medical student in the Boonshoft School of Medicine, passed the project idea along to her fellow medical students, three of whom joined the team.

The medical students found that there has been very little research into breast diseases and how a bra might affect them. 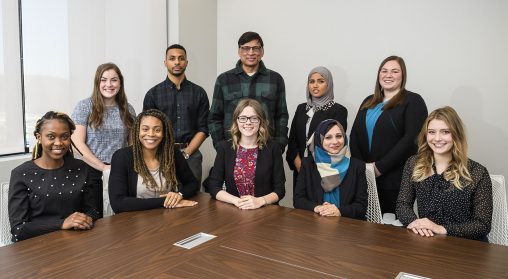 So they are evaluating the pathophysiology of breast development, as well as the possible effect of a poorly fitting bra on breast disease, especially in the case of asymmetry.

They are also investigating changes in breast development over the years due to changing hormone levels and the possible effect of age, weight, implants and underwire bras on breast disease. And they are researching gynecomastia, the development of breast tissue in men as well.

Hamandi said a significant problem for sizing bras for women stems from the fact that a woman’s breasts are often not symmetrical or exactly the same size. As a result, a bra may fit on one side or be too tight or too loose on the other.

Another common problem is the bra underwire, which can affect a woman’s skin by putting too much pressure on too little an area. To fix this, the group is experimenting with different types of metal, as well as 3D printing an underwire.

The project involves taking measurements, manually and via 3D scanning, of the breasts of volunteers to ensure there is a large amount of data for a statistical analysis.

The information, which includes 16 different parameters for each breast, is kept strictly confidential. The different shapes of breasts are classified so equations can be formulated to accurately determine surface area and volume and predict the shapes with respect to age using manual, digital and other data from scientific literature.

The hope is to come up with an asymmetrical bra that will more closely conform to the body of its wearer.

The research conducted by Goswami has been approved by the Wright State Institutional Review Board, allowing for the recruitment of subjects for the study. Those interested in participating in the study should email brg@wright.edu.