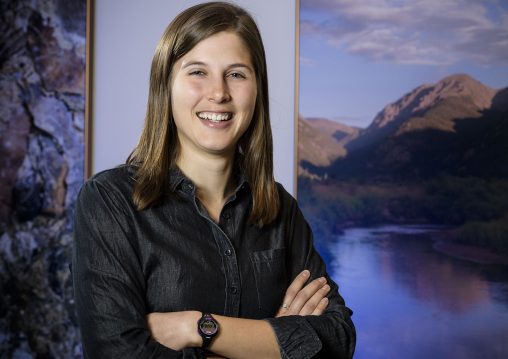 Alison Agather, who earned her Ph.D. in environmental sciences from Wright State in December, helps to identify emerging issues in the Arctic as part of a fellowship with the National Oceanic and Atmospheric Administration. (Photos by Erin Pence)

Due to ice melt, shipping in the Arctic is on the rise, with the expanding trade routes vital for commerce. But Arctic sea ice can be death for ships.

Wright State University alumna Alison Agather is working with the federal government to protect these vessels by helping better predict the extent and thickness of sea ice. And she is also helping increase knowledge about icebergs as well as sea ice in Antarctica.

It’s all part of a fellowship with the National Oceanic and Atmospheric Administration (NOAA) for Agather, who earned her Ph.D. in environmental sciences from the Wright State College of Science and Mathematics in December. One of her projects is with the National Ice Center and the International Ice Charting Working Group.

“We are working to improve models to better predict the state of sea ice to ensure ships can safely transit through polar regions,” she said.

“We are working together to identify emerging issues in the Arctic, which includes increased shipping routes, exploitation of resources and the interests of Arctic populations,” she said.

The fellowships are designed to give students and recent graduates a view into how science policy decisions are made at the highest level in the federal government. Agather will help prepare testimony before congressional committees and subcommittees.

“The fellowship is really going to be a lot of learning from the scientists, but it will also be explaining what the scientists do to the Hill to make sure there is funding,” she said. “We need go-betweens to be able to describe science to the policymakers but also translate the policy to the scientists.”

Agather, who began the fellowship on Feb. 1, is the first to represent Wright State.

As an undergraduate, she became interested in how chemicals move through the physical environment based on their properties. In 2015, she took part in a two-month expedition to the North Pole designed to take the pulse of the Arctic Ocean, measuring levels of toxic mercury in the water and ice. 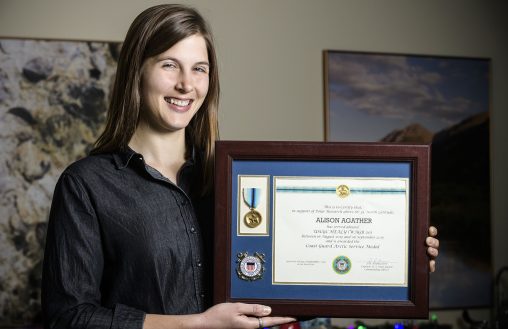 As a graduate student at Wright State, Alison Agather participated in an two-month expedition to the North Pole to measure levels of toxic mercury in the water and ice.

Agather and fellow researchers found very low concentrations of mercury except for elemental mercury, which is what is in the atmosphere.

Agather calls her years at Wright State “a great experience,” applauding the support from faculty and staff.

“They are really focused on helping students achieve what they want to achieve,” she said. “There are really great opportunities there if you put in a little hard work and make yourself  known to be interested and willing to try new things.”

Agather is serving her fellowship as a marine policy assistant with the Ocean Prediction Center, which is part of NOAA and the National Weather Service.

The primary mission of the center, which is in College Park, Maryland, is to ensure that all ships at sea have enough weather information to safely navigate to their destinations. A team of 19 forecasters observe oceanic conditions for storm development, input the data into models and transmit weather forecasts to ships twice a day.

Agather is also involved with a group that combines the interests of the World Meteorological Organization and Intergovernmental Oceanographic Commission. It is working on improving meteorological and oceanographic data collection and promoting data sharing to improve weather and ocean models.

“I see the fellowship as an opportunity to gain new skills, learn more about meteorology and science policy and hopefully translate that into a job doing science policy,” Agather said.