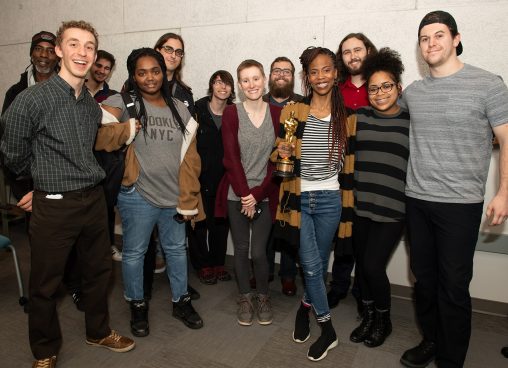 Hannah Beachler ’05 returned to Wright State to talk to students about filmmaking and winning an Oscar for her work on “Black Panther.” (Photos by Erin Pence)

Beachler arrived at the Tom Hanks Center for Motion Pictures on March 15 to speak to about 50 students, who crowded into a classroom after word began circulating that the newly crowned Oscar winner would be there.

As she walked up to the classroom door, Beachler revealed the shiny gold statuette, pulling it out of her handbag.

“Bringing it home to Wright State,” she said with a victory smile.

Beachler, a 2005 graduate of the Wright State Motion Pictures Program, made history when she won an Academy Award in February for her work on the blockbuster film “Black Panther.” She is the first African American to win an Oscar in the Best Production Design category.

Beachler, 48, who was named the 2018 Alumna of the Year by the Wright State Alumni Association, said she has great memories of her time at Wright State.

“My son riding his Big Wheel up and down the hallway while I edited,” she said.

When Beachler walked into the classroom pumping the Oscar over her head, the students erupted into cheers and applause. She spoke for 90 minutes on a wide range of topics to about 50 students, who peppered her with questions.

On what it was like to hear her name called as an Academy Award winner:

“Crazy. …When they said my name I just remember looking at my son like ‘Did they say what I think they said? … It was pretty wild. I was shaking so hard.”

On being the first African American to win an Oscar in the Best Production Design category:

“It’s bittersweet because it sucks that it’s 2019 and I’m the first black anything in my craft. … I’m glad I made history. I’m glad that this barrier has been broken. … (But) 91 years it took. … I think this moment was bigger than me.” 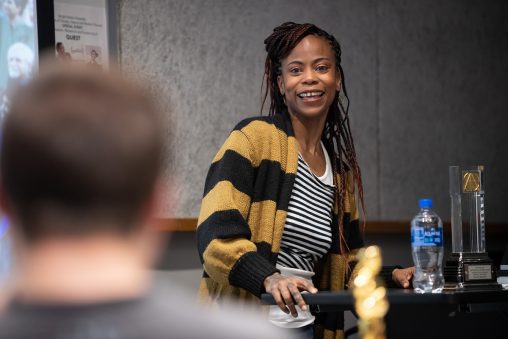 Hannah Beachler is the first African American to win an Oscar in the Best Production Design category.

On dealing with being underestimated:

“It was challenging because the aesthetic was challenging. … I knew we needed to do something fresh and new. … We certainly didn’t do the retro-futuristic thing. We went a different direction.”

On doing a movie that is well-known or doing a lesser-known movie that has a big impact on a smaller group of viewers:

“It’s great when it has an impact on people. … You constantly have to be exercising your creative muscle, constantly all the time; no matter what it is or where you are. … I think the work that we do is for us ultimately. Once it’s out into the world, people want to see it or not, if it has an impact or not, I’m just proud of the work.”

On how Wright State faculty affected her success:

“It was really important to have access when I had a question, when I needed to be set back on course. … Your knowledge is more than you have any idea now in the world of filmmaking. … You have no idea how much ahead of the game you are in some ways.”

On how young artists find their community of collaborators:

On filmmaking tips for students:

“Take your time. … Don’t rush yourself … Work with your team. … Edit in the moment.”

Beachler has agreed to create five scholarships for junior and senior motion pictures students and several scholarships for sophomores as well. Called the Hannah Beachler and Carol Trevino Scholarship, it will be for one year.

Beachler dedicated her Oscar to Trevino, of Wilberforce, her Wright State classmate who was killed in an automobile accident while working on a film near Shreveport, Louisiana, in 2007. 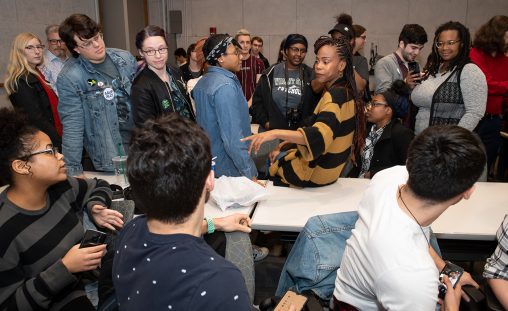 Hannah Beachler has agreed to create a scholarship, named in of her late classmate Carol Trevino, for motion pictures students.

Beachler spent 13 months working on Marvel’s “Black Panther,” overseeing a $30 million art budget and a dedicated crew of several hundred people. She was also the production designer on “Moonlight,” which in 2017 won the Academy Award for Best Picture and the Golden Globe Award for Best Drama. She received the 2017 Art Directors Guild Award for excellence in production design and art direction for her work on “Lemonade,” Beyonce’s visual album that originally aired on HBO.

Beachler was also the production designer on “Miles Ahead,” a biographical film based on the life of jazz musician Miles Davis; “Creed,” the seventh film in the “Rocky” series; and “Fruitvale Station,” which won the Grand Jury Prize for Best Film and the Audience Award for Best Film at the Sundance Film Festival in 2013.