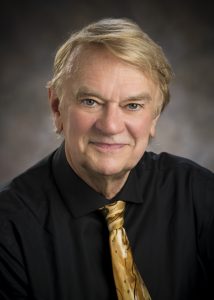 W. Stuart McDowell, professor and artistic director of the Department of Theatre, Dance and Motion Pictures, received the Fredrick A. White Distinguished Professor of Professional Service Award for his efforts to improve the department, nearly doubling it in size.

Linda Caron, dean of the College of Liberal Arts, commended McDowell for his work in the department.

“Through his unrelenting efforts he has grown the Wright State Theatre Program into a flagship program, nationally recognized for its professionalism and talent,” Caron said. “Through his leadership, the Dance and Motion Pictures Programs have also grown dramatically, both in quality of their faculty and in number of students.”

Wright State’s relationship to Hanks resulted in a range of endorsements, including television public service announcements and the naming of the Tom Hanks Center for Motion Pictures at Wright State.

“None of this would have been possible without McDowell’s persistence and commitment to service for this university,” said Joe Deer, chair of the Department of Theatre, Dance and Motion Pictures. “This signature achievement alone would be worthy of recognition.”

McDowell’s students are thriving in theatres around the world. Several alumni have performed in and worked behind the scenes on major productions on Broadway and numerous theatres throughout the United States.