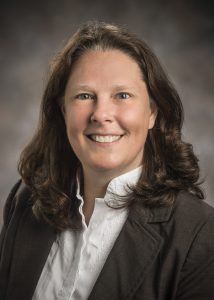 Corey Seemiller, associate professor in leadership studies in education and organizations, received the 2018 Presidential Award for Faculty Excellence: Early Career Achievement for her prolific and impactful scholarship and world-class achievements.

In 2017 alone, Seemiller edited a journal issue, “A Competency-Based Approach for Student Leadership,” and co-authored a book, “Generation Z Leads,” a follow-up to her 2016 book, “Generation Z Goes to College.” She wrote a chapter for another book, wrote three chapters in edited journals, authored seven refereed journal articles, published two applied scholarship articles, completed three ancillary materials and wrote one creative publication. Her latest book, “Generation Z: A Century in the Making,” was released in October 2018.

Seemiller has also given numerous presentations. She gave a TEDxDayton talk called “Generation Z: Making a Difference Their Way,” which has nearly 60,000 views online. She also presented five workshops at the International Leadership Association in Belgium; was a keynote speaker for the Independent Educational Consultants Association; conducted eight other national presentations; delivered 19 invited lectures, colloquia, symposia and seminars; and facilitated four trainings for professionals on “Strengths-Based Leadership” and “Personal Leadership Styles.”

Her excellence in research along with her publication record is supplemented by her excellence in teaching. As a student-centered, pedagogy-driven collaborative educator, Seemiller has contributed significantly to the design and redesign of four courses, producing curriculum, syllabi and Pilot sites with such detail and clarity that they are used by adjuncts as templates for instruction.

Seemiller’s students thoroughly enjoy her classes. She responds quickly to emails and connects with students during and outside of office hours. Her goal is to respond to a student within one hour of them reaching out since they could be working on an assignment at the time they emailed her.

Students say their time feels valued and Seemiller is always well-prepared for each class and uses the class time effectively. Students also say they feel a deep sense of respect from Seemiller.

Another aspect of Seemiller’s excellence is her service. In 2016, Seemiller served as the primary co-creator and co-facilitator of the LeadYou Middle School Leadership Camp, a youth leadership camp grounded in competency development, and in 2017 served as the co-chair for the International Leadership Association’s Leadership Education Academy, which she co-founded.