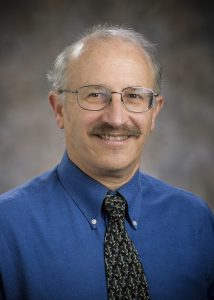 David Goldstein, professor and chair of the Department of Biological Sciences, received the University Professor Award for his excellence in research and his steadfast support for students, faculty and staff.

Goldstein joined Wright State in 1986. In more than 30 years since, including 15 years as the chair of the Department of Biological Sciences, he has contributed significantly in research, teaching and service.

Goldstein’s research has addressed aspects of animal physiology, particularly kidney physiology and water balance. His current focus is vertebrate freeze tolerance, the mechanisms by which a few species, like the local gray treefrog, can survive being frozen.

Goldstein has received approximately $1.5 million in support, mostly from the National Science Foundation. He has trained more than 30 undergraduate and graduate students in research projects.

Douglas Leaman, dean of the College of Science and Mathematics, commended Goldstein for his research. “He has made continued, impactful contributions to his chosen research field and still generates external federal grant support for that work, which is impressive,” Leaman said.

Goldstein has taught classes, mostly in areas of physiology, at all levels of the curriculum. More than 6,000 students have passed through his classroom. Goldstein has been a strong advocate for implementing pedagogical innovations. He has worked with others in his department to develop group-based learning assignments in his large introductory classroom.

As department chair, Goldstein has hired more than two dozen faculty and has fostered a diverse collegial department. With his support, faculty and staff within the Department of Biological Sciences have received eight Wright State Presidential Awards for Excellence.

“This speaks volumes to Goldstein’s leadership and support,” said Lynn Hartzler, associate professor of biological sciences. “He is willing to take on extra teaching himself to allow his faculty to take advantage of research opportunities.”

Goldstein was the principal investigator on a National Science Foundation ADVANCE grant in support of advancing women STEM faculty at Wright State and three partner universities. He has been involved in numerous grant-funded programs to enhance the success of students from demographic groups underrepresented in STEM. As president of the Dayton Regional STEM School board, Goldstein also works to promote innovative educational opportunities for pre-college students and to attract those students to Wright State.