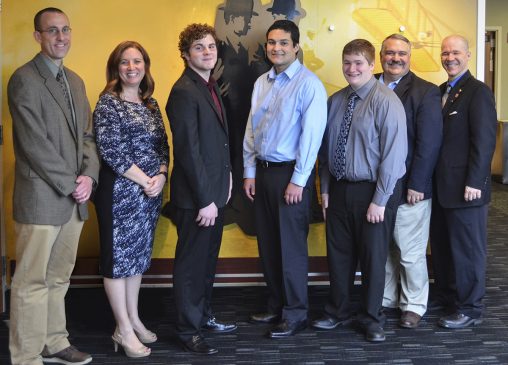 The students, who will enter Wright State’s College of Engineering and Computer Science in the fall, are high-achieving high school graduates from around the state. The scholarship awards were announced May 3 during the Scholastic Recognition and Networking Reception in the Student Union Apollo Room.

Since creating the Reynolds Scholars Program in 2009, Reynolds had already provided $740,000 in scholarship funding awarded to 74 students enrolled in computer science and computer engineering programs at Wright State. The program provides each student with a $10,000 award payable throughout the four years of their academic program. Reynolds recently committed to continue supporting six new students each year for the next four years.

Each new cohort of scholars is hosted by Reynolds and Reynolds for a tour of the Reynolds campus and the opportunity to meet employees in key leadership roles. The visit includes an in-depth look at Reynold’s unique Customer Innovation Center.

The Reynolds and Reynolds Company Foundation focuses on giving to programs in higher education that prepare quality students for key roles in regions where Reynolds has a significant presence.

“Once again, this year’s Leadership Scholars are impressive individuals who already have distinguished themselves as students and who bring to the university unmatched potential for what they can still achieve,” said Willie Daughters, senior vice president at Reynolds and Reynolds and a trustee of the Reynolds and Reynolds Company Foundation. “All of us at the Reynolds Foundation believe strongly in the unique role that universities can play for individuals and for our communities. Higher education is a great multiplier, and it’s gratifying to see our partnership with Wright State continue to make such a positive impact on students and the university’s programs in engineering and computer science.”

In addition to the engineering and computer science scholarship support, the $320,000 Reynolds gift commitment will support increased scholarship funding at the Wright State Lake Campus in Celina and establish a new scholarship supporting business students involved in the student-run ReyRey Café, a Reynolds-sponsored coffee shop established in Rike Hall on the Dayton Campus in 2015.

As one of the oldest corporate citizens headquartered in the Dayton region, Reynolds’ support of student scholarships and programs dovetails with Wright State’s mission of transforming the communities the university serves by providing students with the experiences and resources critical to their success.

Reynolds and Reynolds was founded in Dayton, Ohio, in 1866 and has been headquartered in the area continuously since then. Today, with associates throughout the U.S., Canada, the U.K., and Europe, Reynolds and Reynolds is a leading provider of automobile dealership software, services and forms to help dealerships deliver better business results and transform the customer experience. The company’s other major U.S. locations include Houston and College Station, Texas, and Celina, Ohio. (www.reyrey.com)