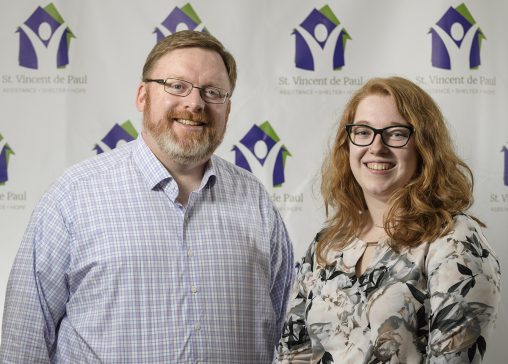 Jacqueline Hutchison, a social work major, was paired with Michael Vanderburgh, executive director of St. Vincent de Paul, as part of a mentoring program offered by the College of Liberal Arts and the Center for Liberal Arts Student Success.

When Wright State University social work student Jacqueline Hutchison got matched up with a mentor, she never dreamed it would lead to a job at St. Vincent de Paul in a key administrative position.

Hutchison, who graduated May 4 with her bachelor’s degree, is helping with development by managing the donor database, processing donations and researching grants for St. Vincent de Paul, a Catholic lay organization best known in Dayton as assisting people in need of clothing, food and shelter.

“It’s different every day,” she said of her job. “There are things that are sometimes more challenging, and I like that it’s not easy all of the time. I enjoy all of it.”

Hutchison’s success is largely the result of the College of Liberal Arts’ new professional mentoring program and the Center for Liberal Arts Student Success (CLASS), an innovative program that combines advising, faculty and student relationship-building, peer mentoring and career counseling. The combination has created a powerful tool that helps students transition from college into careers.

“The mentoring program really helps students understand the world of work, what it’s like to be in a professional environment, plus all the networking,” said Wayne Stark, director of workforce development for CLASS and consultant with the Wright State Career Center. “The synergy that happens between the mentoring and the work that CLASS does really connects.”

The mentors, many of whom are Wright State graduates, come from the professional world of IT, consulting, development, nonprofits and other fields. Some mentors and mentees have been identified at mentor and CLASS events such as the Internship Partners Expo.

If there is an alignment between a mentor and mentee that is obvious, the connection is made. But it is strongly felt by the College of Liberal Arts that any mentor with any background can help any student with any interest. And all of the mentors are well-connected.

Hutchison got matched up with Michael Vanderburgh, executive director of St. Vincent de Paul. Vanderburgh grew up in Dayton. Both of his parents are Wright State graduates as is Vanderburgh, who graduated in 1993 with a bachelor’s degree in urban affairs. He earned his master’s degree in political management from George Washington University.

After college, Vanderburgh started his own business selling insurance, then went into charitable gift-planning and later worked at Dayton Children’s Hospital and the American Cancer Society. He was also chief development officer at the Archdiocese of Cincinnati and 18 months ago came to work at St. Vincent de Paul.

“I think it’s important for students to have interactions with professionals related to their field and not connected to the university,” he said. “We by definition represent the real world, the workplace outside the Ivory Tower.”

Hutchison, who grew up in Xenia, became interested in social work because of life experiences and her desire to help people.

“I’m mostly interested in macro social work, which is bigger-picture policy or at the administrative level,” she said. “It is a good intersection of how policy and government works with social issues.”

Hutchison enrolled in the mentoring program in the spring of 2018 to make sure she was on the right track with the ideas about what she wanted to do following graduation. 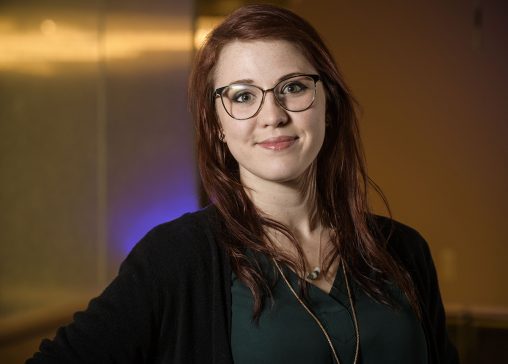 Michaela Grant, a political science major, was mentored by the interim CEO of a museum.

She began volunteering at St. Vincent de Paul in October, doing some grant research. In January, she took an interim position and then was offered a full-time job in March.

“It was really great,” she said. “Mr. Vanderburgh was really good about helping connect me to people who had experience in social work, who were doing things similar to what I’m interested in doing. Everything I was considering was pretty closely aligned.”

Stark said the mentoring and CLASS programs have led to some great outcomes.

One mentee now has a job with Honda. Another works at Wright-Patterson Air Force Base. A third is a social media manager at Vivial, a marketing consulting company. And numerous mentees have been accepted into graduate schools, some with full scholarships.

Stark helped Michaela Grant, of Beavercreek, with applications to graduate school and her job resume. In the mentoring program, she was paired up with the interim CEO of a museum.

“She was really great in teaching me what it meant to be a professional woman and how to balance a family someday,” said Grant. “She was a very sharp woman.”

After graduating in the fall with a bachelor’s degree in political science and a minor in Spanish and a 3.7 grade point average, Grant got an internship with the city of Bellbrook, helping with annual reports and performing other duties. That led to a permanent job as head clerk of the utility billing department.

She credits the mentoring program in part for her success.

“The program really did set me up to feel more like a professional than a student,” she said. “That’s a hard transition for a lot of people.”

The mentoring program began as a pilot project in the spring of 2018 with 13 mentor-mentee pairs. This year the number doubled to 26, with sophomores added to the mix of junior and senior students.

Last November, William Hanlon, financial adviser and director of internships at Northwestern Mutual, came to campus and provided the mentored students with an online self-assessment that enabled them to better understand what kind of jobs and work environments would suit their skills and personalities. The students also received a book of career tips thanks to a grant from the Wright-Patt Credit Union. Each mentee was given “Getting from College to Career” by Lindsey Pollak.

In March, the mentoring program partnered with the Dayton Area Chamber of Commerce’s Generation Dayton to offer mentees complimentary attendance for a professional development opportunity.

The college is recruiting new mentors and mentees over the summer and is looking to maintain the program if not grow it.

Vanderburgh said the mentoring program has enabled him to strengthen his connection to Wright State.

“Also, it’s given me an opportunity to identify and cultivate young talent, which is supremely important for employers today because there are simply not enough graduates to go around anymore,” he said.

In some cases, the mentoring program has produced unexpected career opportunities.

Even though Hutchison has been accepted into the master’s in public administration program at The Ohio State University, with the help of CLASS and Stark, she plans to keep working at St. Vincent de Paul for at least a year before deciding whether to pursue her master’s.