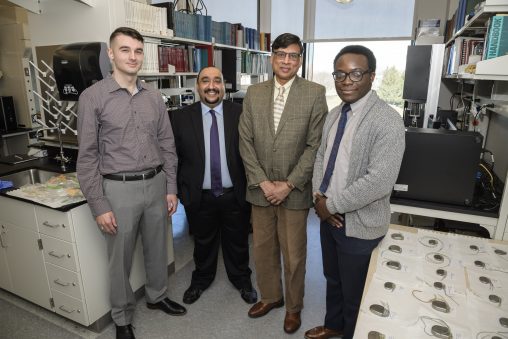 A Wright State University biomedical engineering graduate student investigating the durability of pacemakers and other cardiac devices has briefed the U.S. Food and Drug Administration on the progress of his team’s research.

Anmar Salih, a master’s degree student, presented his research findings to FDA officials in Washington, D.C., during a telephone conference call on March 27.

Salih and two other graduate students are investigating what kind of damage occurs while the pacemakers, which can last 15 years or longer, are inside the body. The research is based on 100 pacemakers retrieved from deceased patients who donated their bodies to science.

About 3 million people worldwide are living with pacemakers, according to Diagnostic and Interventional Cardiology magazine.

In addition to the pacemaker itself, the researchers are investigating its leads — the electrodes that connect the pacemaker to the heart and deliver energy that helps patients maintain a normal heart rhythm. The coils of the leads can be stretched and stressed during removal of the cardiac devices.

“We are trying to understand the mechanics of how these leads are going to degrade with time,” said Tarun Goswami, professor of biomedical, industrial and human factors engineering who is overseeing the research.

The researchers are also investigating implantable cardioverter-defibrillator devices. These ICDs detect any rapid, life-threatening heartbeat or arrhythmia and quickly send an electrical impulse to the heart to change the rhythm back to normal.

The researchers have a complete history of the ICDs, including how often they fired up during their lifetimes.

Salih, who worked as a senior clinical specialist for a major manufacturer of pacemakers and ICDs prior to coming to Wright State, has been working on the research project for about 18 months.

One goal of the research is to try to increase the lifetime of the devices by increasing the durability of the leads. Isheunouya Mazani, one of the student researchers, said the leads, which have a polyurethane coating, can be susceptible to damage, such as breaks in the coating that reveal the coils. The researchers are trying to determine if that only happens when the devices are being surgically removed from the patient.

“We are trying to figure out how this damage is occurring … and how we can better predict that,” he said.

FDA officials are investigating the electromagnetic compatibility of the cardiac devices with wireless communication and magnetic resonance imaging, scanners that generate images of body organs for medical purposes. They have expressed interest in collaborating with the Wright State researchers on that aspect.

Current pacemakers are relatively immune to electromagnetic interference because the circuitry is shielded inside a hermetically sealed titanium or stainless steel case that often has additional insulative coating. In addition, increased use of bipolar leads are capable of filtering out non-cardiac signals.

“Pacemakers now are typically made to resist interference from magnetic and electrical fields,” said student researcher Winston Crosby, adding that there are now pacemakers that are compatible with MRIs and cell phones, for example.

However, he said if something was to go wrong with a pacemaker, devices that generate electric or magnetic fields might be able to damage the circuit controlling the pacemaker or the leads.