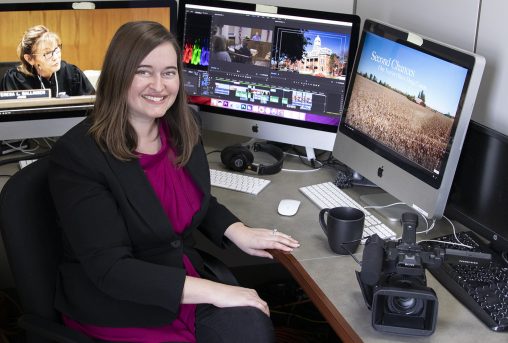 Anne Fife, who graduated in 2008 with a bachelor’s degree in mass communications-TV broadcasting, produced the documentary film “Second Chances: One Year in Ohio’s Drug Courts.”

A documentary film that provides a powerful, up-close look at how Ohio courts adjudicate defendants with drug addictions and steers them to the road to recovery was produced by Wright State University alumna Anne Fife.

The one-hour film, released in May, follows the drug use and adjudication of 19 Ohioans. It documents the complex struggle of drug addiction and how courts can play a crucial role in the recovery attempts of users, their families and communities.

Fife grew up in Milwaukee and later moved to Columbus, Ohio.

“Being involved with television was a goal of mine since I was a child,” said Fife. “I used to make videos with my childhood neighbors.”

Fife said attending Wright State was a great choice for her because of its location, cost saving and beautiful campus. She graduated in 2008 with a bachelor’s degree in mass communications-TV broadcasting and a minor in business marketing.

“Wright State was a wonderful place to learn about the business and grow a professional network to advance in this field,” she said.

Ohio Government Telecommunications is contracted by the Ohio Supreme Court to cover oral arguments before the court and produce videos to educate the judicial community and the public about the judicial system.

“Second Chances” was produced under contract to the Ohio Supreme Court’s Office of Public Information and released through the office’s Court News Ohio website.

“This film takes a very deep look into the human side of drug use, by the users and from the bench,” said Ohio Supreme Court Chief Justice Maureen O’Connor. “The film shows the thoughtful, caring, but firm work of drug courts as they deal on a personal level with the struggles of those trying to ‘get clean.’”

“Viewers learn about drug abuse directly from those who are living through it and from judges and court staffers who are invested in the outcomes, making this film unique,” added Edward Miller, the public information director at the Supreme Court and executive director of the film.

Fife and her crews made repeated trips to Medina County near Cleveland, north central Ohio’s Marion County and Hocking County in southeast Ohio.

“We didn’t know what we were going to encounter each time we met with participants in court or out of court, or when we went to court and heard from the judges,” Fife said.

“One thing I took away from this process was not to give up on people,” Fife said. “There are many times that people surprised us by making small changes that really affected their lives in a positive way.”

“One thing that will stick with me is the realization that a person with addiction issues is more than just that label of addiction,” Fife said.