When he was a boy, Neil Armstrong played the baritone in a band called the Schoolboy Mississippi Moonshiners. And he cleaned the mixing machine as part of his job at a bakery in his hometown of Wapakoneta.

These lesser-known facts about the first man to walk on the moon are revealed in photographs at Wright State University’s Special Collections and Archives in the Dunbar Library.

The photos, newspaper clippings of the moonwalk and even a box of spacesuits in the collection are getting increased attention as part of the celebration of the 50th anniversary of that historic walk on July 20, 1969.

“We have all of this great material from the Dayton Daily News Archive on the moon landing,” said Dawne Dewey, head of Special Collections and Archives. “It’s part of our amazing aviation history collections.”

Recently, two students interning at Wright State’s New Media Incubator produced a video on the archives’ aviation and space collection that included the Armstrong items. It was part of a series of videos funded by the Wright State University Friends of the Libraries.

“The materials we have in the archives don’t stop there. They keep going,” she said. “Researchers around the world may not think of our archives as having more recent materials. Our holdings cover aviation history from kites to the space age and include both military and civilian history, aerospace medicine and human factors engineering.” 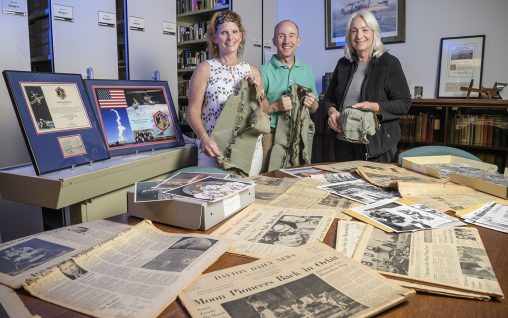 Sue Polanka, left, university librarian; Bill Stolz, reference and outreach archivist; and Dawne Dewey, head of Special Collections and Archives, with some of the archives’ materials related to the Apollo 11 mission. (Photo by Erin Pence)

The archives has many original photos of both a young Neil Armstrong and his days as an astronaut. It includes an autographed photo of the three Apollo 11 astronauts — Armstrong, Buzz Aldrin and Michael Collins. And there are photos of Wapakoneta residents preparing for a parade that would honor Armstrong after his return from the moon.

“He was a hometown hero for Wapakoneta just like the Wright brothers were hometown heroes for Dayton,” said Dewey. “You can draw so many parallels between the Wrights’ story and Armstrong’s story. And he revered the Wrights. He would have rather talked about them than himself.”

In addition to photographs, the archives has numerous newspaper clippings from the Dayton Daily News and the Dayton Journal Herald on the moonwalk and its aftermath. “Man Walks on the Moon,” “Old Glory on the Moon,” “Moon Pioneers Back in Orbit” and “Heroes Safe Back Home” are a few of the headlines.

“It’s very significant because the moon landing was a big part of a certain generation’s experience,” said Dewey.

“We think of the big bulky astronaut suits, but these were supposed to be very tight and were more mobile, said Bill Stolz, the archives’ reference and outreach archivist. “We have a lot of prototypes he designed of all different sizes, different materials, different styles.”

Special Collections and Archives recently received a call from NASA inquiring about the suits for the purpose of research into possibly using similar suits in missions to Mars.

The video series, called “In the Archives,” was produced by students Amanda Harris and Nicolas Green. Supervised by Jen Ware, associate professor in the Department of Communication and co-director of New Media Incubator, the students have also produced videos on Huffman Prairie, women’s suffrage and Paul Laurence Dunbar.

“The archives contains so much life and history of our area and Dawne and her team are so knowledgeable that we want to be able to share those stories with other people,” said Ware.

Dewey said the videos help spread the word about what’s in the archives and the University Libraries.

“And the students are learning the craft of filmmaking and how to interview people,” she said.

Sue Polanka, university librarian, said the Friends of the Libraries is happy to support the video project.

“It highlights our historical collections while using modern formats and channels students find very easy to use,” she said.

Green said it was nice tying the video to the Dayton area and early aviation history.

“And the jump into Wright-Patterson and the moon landing was really interesting,” he said.