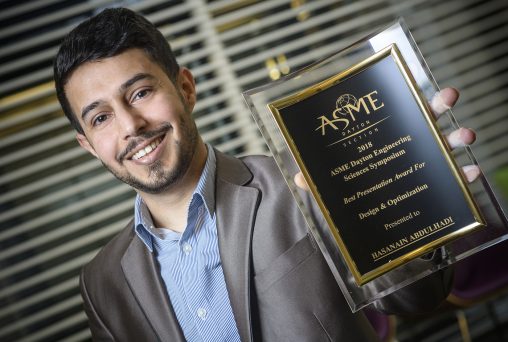 Hasanain Sami Abdulhadi, a Ph.D. engineering student at Wright State, was honored for best presentation in design and optimization at the Dayton Engineering Science Symposium. (Photo by Chris Snyder)

Research into lattice-design optimization and additive manufacturing led to a prestigious award for Hasanain Sami Abdulhadi, a Ph.D. engineering student at Wright State.

Abdulhadi was honored by the American Society of Mechanical Engineers for best presentation in design and optimization at the Dayton Engineering Science Symposium.

Lattice structures produced by 3D printers are of high importance in the aerospace and biomedical fields. Optimizing those structures is a key goal of researchers.

A student from Iraq who carries a 4.0 grade point average, Abdulhadi has been working under the guidance of Ahsan Mian, an associate professor of mechanical and materials engineering in the College of Engineering and Computer Science.

ASME is a professional association that promotes engineering and allied sciences. It has more than 110,000 members in over 150 countries.