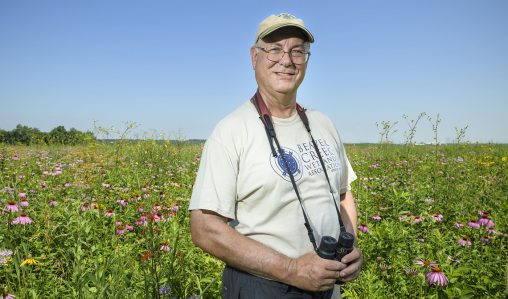 David Nolin, who earned bachelor’s and master’s degrees in biology from Wright State, details the natural and human history of Huffman Prairie in his book “Discovery and Renewal on Huffman Prairie: Where Aviation Took Wing.” (Photos by Erin Pence)

It sits on a sprawling Air Force base and is surrounded by a runway, a skeet-shooting range, a golf course and a busy highway. But Huffman Prairie is a sea of natural tranquility, displaying a colorful palette of wildflowers and attracting a countless variety of birds and insects.

And it epitomizes the career of two-time Wright State University biology graduate David Nolin, who not only has had a hand in restoring the prairie but has also helped acquire and preserve thousands of acres of natural areas in the Dayton region.

Most recently the retired director of conservation for Five Rivers MetroParks has authored “Discovery and Renewal on Huffman Prairie: Where Aviation Took Wing.” The book, which Nolin began writing in 2015 after he retired, was named the winner of the Regional Non-Fiction Award by the Independent Book Publishers Professional Group.

“That was thrilling,” he said. “I didn’t see that coming.”

Nolin says he really didn’t intend to write a book, but rather just started researching the prairie and writing stuff down.

“I think I had been writing it in my head for a long time,” he said. “I spent a lot of time at the archives in Greene County and at Wright State and poring over Miami Conservancy records. It seemed like it might be interesting to people because it wasn’t just the nature of the prairie, it was the history of the Wright brothers in Dayton.”

Huffman Prairie is 115 acres of tall grasses, diverse wildflowers, a few shrubs and a nature trail. It is adjacent to the Huffman Prairie Flying Field, where the Wright brothers developed the first fully controllable airplane and trained as pilots.

In his book, Nolin details the natural and human history of the prairie and changes made to it by Native Americans, early settlers, farmers, flood control engineers and the U.S. government. He describes how part of the prairie survived the changes and has since been restored to the tallgrass prairie that once populated the landscapes of the Midwest.

The prairie currently boasts everything from purple coneflowers to royal catchfly, a red-flowered herb that is an endangered species in the state.

“I’m sure there is more royal catchfly here than there is in the rest of Ohio,” said Nolin. 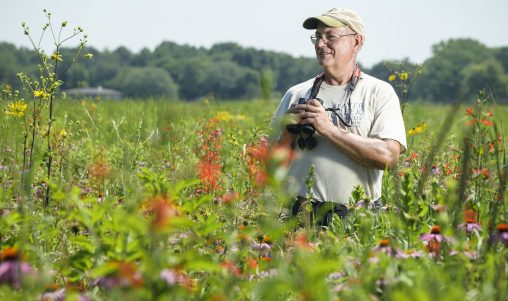 David Nolin was responsible for habitat management and land acquisition for Five Rivers MetroParks, where he worked for more than 30 years.

He says Wright-Patterson Air Force Base has been a great steward of the prairie for a long time.

“I think they’ve demonstrated their commitment,” he said.

Nolin grew up in Fairborn. His father was a fighter pilot during World War II and flew missions to Japan from Iwo Jima. He later worked at Wright-Patterson as a civilian contracting officer.

Nolin’s interest in nature had its roots in the fishing and camping trips he would go on with his father. In junior high school, Nolin was further inspired by “Call of the Wild,” the Jack London adventure novel set in the Yukon.

“That was pretty impactful,” he said.

After graduating from Fairborn Baker High School in 1976, Nolin enrolled at Wright State and earned bachelor’s and master’s degrees in biology. His thesis focused on the use of nest boxes by the American kestrel, the smallest and most common falcon in North America. He worked several campus jobs, including one where he helped a researcher grow algae in his lab.

After graduating from Wright State in 1984, Nolin took a job with the Park District of Dayton-Montgomery County as the agency’s first land steward specialist. For the next 30 years he was employed by the district — now called Five Rivers MetroParks — and was responsible for habitat management and land acquisition. He negotiated and closed on more than 7,000 acres of new natural areas and conservation easements. In total, Five Rivers preserves and protects about 16,000 acres in Montgomery, Warren, Miami, Greene and Preble counties.

“It’s a vital regional asset,” Nolin said of the MetroParks. “Ninety percent of its land is natural. And they maintain high standards. If you go to the parks, they are always clean and safe. When you put all of that together it’s pretty important.”

Nolin’s former job included attending zoning meetings and working with landowners and developers to try to preserve important natural areas. He would extensively research an area’s plant life, wildlife and other biological attributes in order to make a case that it should be protected.

“With developers, it was usually more productive to talk to them and figure something out than to fight,” he said.

Nolin also had to sometimes persuade landowners to allow part of their property to be protected from farming or development. He recalled one agreement that was reached after he gave a landowner his new MetroParks hat the man had been admiring.

While he was at Wright State, Nolin studied the Theory of Island Biogeography, which postulates that the bigger and more connected that ocean islands or forested tracts are, the more biologically stable they are, enabling animals and plants to thrive and better survive natural disasters. Nolin later put the theory into play when MetroParks connected three very large parks near Germantown along Twin Creek. 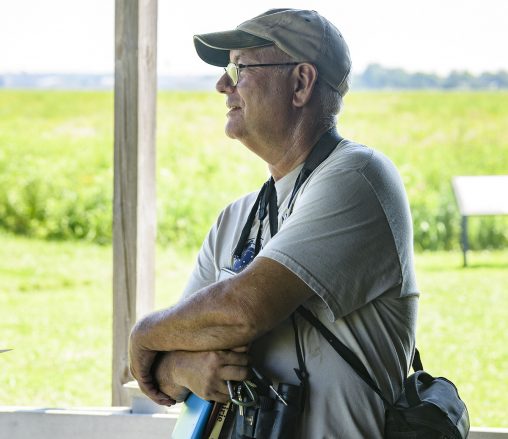 David Nolin returned to Wright State during the spring semester to give the annual Wayne Carmichael Lecture in Environmental Sciences.

“Sure enough that’s where bobcats showed up. And that’s where we had a bear for several years. It worked,” said Nolin, calling it his proudest achievement. “By going to Wright State I learned about that basic ecological principle and then applied it to a career of over 30 years. Wright State should feel pretty good about that.”

“And I know he had this impact on many other students he took under his wing,” said Nolin.

Nolin currently volunteers for several conservation organizations. In March, he was the speaker for the annual Wayne Carmichael Lecture in Environmental Sciences at Wright State.

Don Cipollini, professor of biological sciences and director of environmental sciences at Wright State, said Nolin has extensive knowledge of the natural world and a keen ability to capture the essence of it on film and in print.

“He is passionate about nature and the role that humans play in its protection,” said Cipollini. “With his calm and engaging demeanor, he’s been able to convince many others to feel the same way.”

“The more people know about something and care about it, the more likely it is that it will endure,” he said.