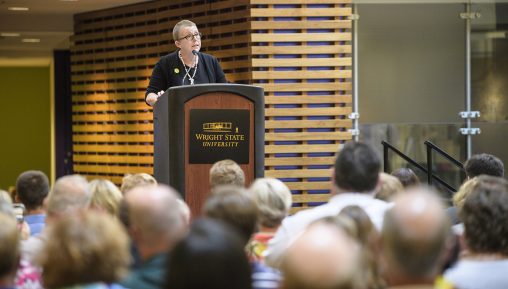 Provost Susan Edwards during the campus gathering to remember Megan Betts, a senior environmental sciences student at Wright State, and other victims of the mass shooting in Dayton’s Oregon District.

Wright State University mourned the victims of Dayton’s mass shooting with an emotional campus gathering that shared the pain as well as the community’s warmth, strength and unity.

More than 250 students, faculty, deans, staff and community members gathered in the Atrium of the Student Union on Aug. 5 for a ceremony that included prayer, a rendition of “Amazing Grace” and words of compassion and inspiration.

Nine people were killed and 27 injured in an Aug. 4 shooting in Dayton’s Oregon District before police brought down the gunman.

Among the victims was 22-year-old Megan Betts, a senior environmental sciences student at Wright State who also sang in a campus choir.

“I, like you, are devastated at such a senseless tragic loss of life,” said Provost Susan Edwards, her voice choked with emotion at one point. She urged those emotionally traumatized by the tragedy to seek out help and support.

“I implore you to talk. I implore you to show your emotions,” she said. “Our community needs to unify and declare our support for one another as we navigate through this next academic year and beyond.”

Kimberly Warrick, associate professor and coordinator of vocal studies, sang “Amazing Grace,” a touching rendition that had members of the audience joining in.

Laura Luehrmann, director of the Master of Arts Program in International and Comparative Politics and president of the Faculty Senate, told the audience that as educators and engaged citizens people depend on them to make sense of the tragedy.

“In the midst of our tremendous grief let’s please each personally commit to move forward this week with difficult conversations and action grounded in respect, guided by research and focus,” she said. “Let’s please each leave this space with a commitment to do everything we can to make sure that vigils such as this are as rare as they should be.”

“Today more than ever we need to be kind to each other, to care for each other and to support one another,” Dickstein said. 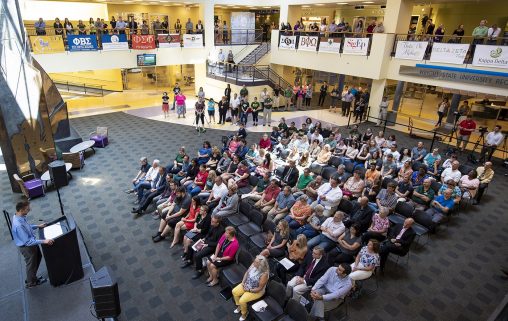 More than 250 students, faculty, deans, staff and community members gathered in the Atrium of the Student Union on Aug. 5 for the ceremony.

The 20-minute event concluded with words and a prayer from Father Ethan Moore of Catholic Campus Ministries.

The gathering was streamed live on the Wright State Facebook page and by WDTN and filmed by broadcast crews from Dayton, Cincinnati and Cleveland.