Port in a storm

The day after the Memorial Day tornadoes ripped through the Dayton suburb of Trotwood, Ashley Browning was out in the neighborhood handing out bags of sandwiches, chips, cookies and water to the victims.

For the following two weeks she worked out of a dance studio, accepting and handing out donated items.

“I want it to be a space where people can come and get those personal hygiene items, household items, cleaning supplies,” said Browning. “Also they can get a hot meal because people are still staying in hotels and they’re not eating hot meals.”

Giving back has become part of Browning’s life journey.

“I just know that if I didn’t have people in my life to help me that I could be in situations that are not the best,” she said. “So being able to help somebody or being a helping hand is the best experience ever.”

Browning grew up in Dayton, the daughter of now a retired schoolteacher father and a mother who operated a home daycare center.

After graduating from Meadowdale High School in 2004, Browning enrolled at Kentucky State University and graduated in 2008 with her bachelor’s degree in criminal justice. Then she earned her master’s degree in rehabilitation counseling from the University of Kentucky in 2009. 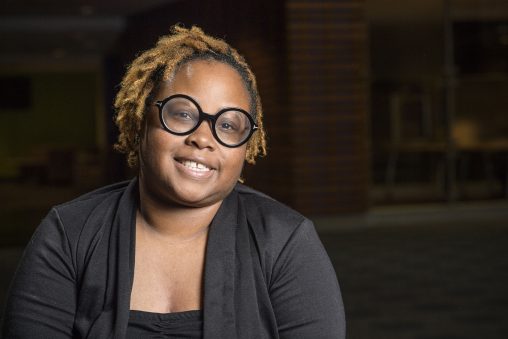 Ashley Browning, project manager for the SARDI Program in the Boonshoft School of Medicine, opened The Heartbeat to distribute goods and foods to those affected by the Memorial Day tornadoes. (Video by Kris Sproles / Photo by Chris Snyder)

Browning stayed in Lexington, Kentucky, for the next four years, working in a substance abuse treatment center for women and a mental health agency. She said the experience taught her how to treat people and made her realize that she herself could have been in their shoes had she made different life choices.

“That is how I got into the field of helping others, being able to give back,” she said.

Browning returned to Dayton in 2013 and founded SoLoved, a project-based organization that assists different populations through community outreach with monthly initiatives. She also began working with homeless military veterans.

In 2018, she was hired as a project manager for the Substance Abuse Resources and Disability Issues (SARDI) Program in the Wright State Boonshoft School of Medicine. The program seeks to improve the quality of life for people with disabilities, including those with behavioral health issues, by conducting research, developing intervention approaches and training, and disseminating information.

At SARDI, Browning oversees a grant program designed to make college students aware of HIV and other sexually transmitted diseases and reduce their rates.

Earlier this year, she began working on her certificate in nonprofit administration in the Wright State School of Public and International Affairs. She wants to learn more about the operation of nonprofits and eventually would like to own her own nonprofit.

Browning says Wright State is a great space and atmosphere for growth and learning.

“I love my job. I love my co-workers,” she said. “I love everything that Wright State has to offer and I love the program I’m in so far for nonprofit administration.”

Browning said she is also getting an education in how to help people who have lost their homes because of the tornadoes.

“We put out a mass call on Facebook and got a ton of donations,” she said. “Social media is powerful. We were able to use that tool in that moment.”

Browning said the tornado victims are very grateful for the donated food and supplies, telling her that they didn’t know what they would have done without that.

The Heartbeat opened July 28 at 1573 Guenther Rd. in northwest Dayton. It is open one day a week, but tornado victims are welcome to come anytime by giving advance notice. As many as 25 volunteers work at the site on any given day.

For Browning, even the smallest of gestures can help someone whose world has been turned upside down.

“If I’m able to help one person I’m happy with that,” she said.