Right on the money

When she arrived at Wright State University as a freshman, Kristy Epperson hoped she would be able to graduate with less than $40,000 in student loan debt.

She did. In a very big way.

“How I did that was pretty much hard work and a little bit of sacrifice,” said Epperson. “I looked at it as such a short period of my life that I could make these sacrifices and use this discipline and that it would set me up for financial freedom in the future.”

Epperson’s story has been featured on CNBC, in the Detroit Free Press and in other media outlets.

Epperson grew up in Germantown. Her father is a mechanic and her mother is an educational aide at a high school.

As Epperson prepared to become a first-generation college student, she realized she couldn’t afford to attend a private or large public university. After graduating from Valley View High School in 2014, she came to Wright State, attracted in part by its affordability.

Her decision was cemented by a campus visit. “I just loved it. I could see the opportunity that was here,” she said.

Epperson intended to major in biology but had second thoughts two days before classes began. So she took a couple of nursing pre-requisite courses and three weeks later decided to major in nursing.

She worked her way through college to try to keep her student loans as low as possible. She worked at Wright State as an orientation mentor and a residence assistant. She also worked as a personal assistant for students with disabilities and as a nursing aide at a hospital.

Epperson attributes much of her success to Wright State, enabling her to get a four-year degree while accumulating lower debt than she would have had at some of the other schools she had considered.

“And not only that. I feel like Wright State really gave me the skills I needed to be successful after I graduated to get a job and start off a career well,” said Epperson, who currently works as an oncology nurse at a local hospital. 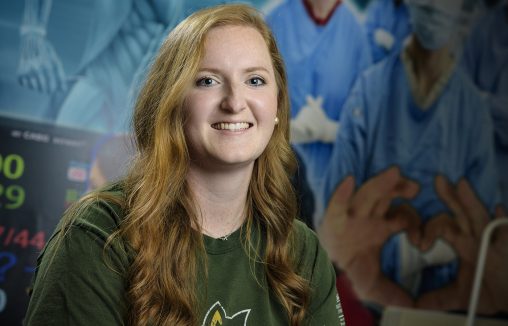 Kristy Epperson, who graduated from Wright State with a bachelor’s degree in nursing, paid off her student debt in a year-and-a-half. (Video by Kris Sproles / photo by Chris Snyder)

Shortly after graduation, Epperson bought a house. Then panic set in when she realized that with the house payment and her debts, she wouldn’t have the financial reserves if she was faced with a major, unexpected expense.

But buying the house actually inspired Epperson to pay off her other debts.

The way the scheduled monthly payments had been set up, it would have taken Epperson 10 years to pay off her student loans.

“I didn’t really have a long-term plan,” she said. “It occurred to me that the first thing and the easiest change to make would be to pay down the debts.”

Epperson worked two nursing jobs and did a stint as a substitute teacher so she could pay the loans off early. She also created a strict budget and cut back on expenses, giving up concerts and dinners with her friends.

“I would say the toughest part of paying off the debt was probably those sacrifices I had to make and just denying myself that instant gratification because I was working toward that longer-term goal,” she said. “That was definitely hard.”

Epperson didn’t give up everything. One financial splurge was a trip to Australia to visit a friend.

“I bought a plane ticket and was like ‘That definitely wasn’t in the plans,’” she said. “But it worked out.”

In December, Epperson started an Instagram account she called debtfreeattwentythree. Her social media friends gave her a lot of support even when she occasionally spent money she hadn’t budgeted for.

“People would just encourage me to keep going,” she said. “I think that really helped get me through the end of paying off my debt.”

Epperson made her final student loan payment in May, waking up early before going to work to write a check for $650.

“I was so excited, but then it was also this moment of like, ‘Gee, something I’ve worked so hard for the past year it’s over. That’s it,’” she said.

Epperson is not against using credit cards, just opposed to using them inappropriately.

“It’s kind of crazy that you can rack up all of this credit card debt on frivolous expenses and not really have the money to pay for it. You just have to have the money for the minimum payment,” she said. “So I use my credit card very sparingly, but I just pay it off right away.”

Now that she’s debt-free, Epperson plans to build on her wealth.

“I think now I’ll be able to invest more and have more opportunities of things to do with my money since it’s not tied up in paying off loans,” she said.

“It’s truly what our students are about,” she said. “College debt is a national issue. So it’s nice that Wright State is able to offer an affordable, quality education to our students and then watch them succeed.”

The whole experience has turned Epperson into a long-range financial planner. She first plans to save up a six-month fund for emergency expenses and then begin to make investments that will hopefully enable her to retire early.

“I don’t ever plan on racking up debt again,” she said. “I worked too hard to get out of debt to accumulate more.”