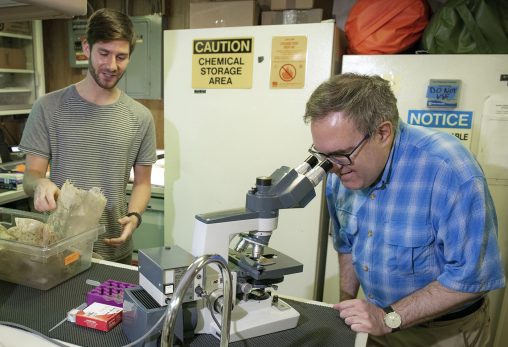 A Wright State University Ph.D. student was able to meet with and speak to the nation’s top environmental regulator during a research cruise on Lake Erie.

Leon Katona, an environmental sciences Ph.D. candidate and graduate teaching assistant, was working in a lab on board the Lake Guardian on July 19 when he was approached by Andrew Wheeler, administrator of the U.S. Environmental Protection Agency.

The Lake Guardian is the EPA’s largest research vessel. Wheeler was touring it prior to a news conference to announce a new program designed to help remove trash from the Great Lakes and its shores.

Katona was on the research trip to study the communities of microalgae that live in the lake sediments and to investigate interactions between invasive mussels and attached algae. He also collected samples for metabarcoding of microbial environmental DNA, which is a way of assessing biodiversity.

The sampling effort was a part of the Cooperative Science and Monitoring Initiative (CSMI) through the Great Lakes National Program Office. The office surveys the flora and fauna that live on or near the lake bottom, known as the benthic habitat.

Katona, who was also part of a CSMI cruise on Lake Ontario in 2018, is advised by Yvonne Vadeboncoeur, professor of biological sciences.

The EPA surveys all of the Great Lakes twice a year, including Lake Erie and its dead zone, a large area of low-oxygen water located in Lake Erie’s central basin. The lake’s annual algal bloom, which can contaminate drinking water, is expected to be more severe than last year. Its size depends on the amount of rainfall and how much phosphorus runs off farms into the Maumee River, which flows into the lake.

Before announcing the Trash-Free Great Lakes Grant Program, Wheeler joined Ohio Congressman David Joyce aboard the Lake Guardian and heard from scientists about their work studying the Great Lakes. They were told how the vessel sampled water and mud and saw the equipment the scientists used to film underwater. The trash-free program will provide about $2 million in grants to clean up waste along Great Lakes beaches, shorelines, harbors and rivers. The money will also support trash and litter prevention efforts as well as educational projects.

“We are committed to protecting and restoring one of America’s greatest natural resources,” Wheeler said at the news conference.

During the news conference, he mentioned Wright State first when he was listing the universities and agencies conducting research.

Leon’s participation in the Lake Guardian cruises over the past two summers stemmed from connections he made at a professional conference where he presented some of his research.

“Wright State University helped fund my travel to the conference of the International Association of Great Lakes Research,” he said. “I’m grateful that the Environmental Sciences Ph.D. Program and the Department of Biological Sciences support of student research and travel. These opportunities have expanded my dissertation research immensely and contributed to Wright State’s reputation as an institution that conducts high-caliber aquatic science research.”

“It was an honor to represent our university and the Environmental Sciences Ph.D. Program on the cruise,” said Katona.